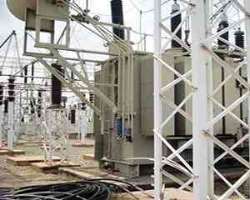 Section of a Power Holding Company of Nigeria's substation

Contrary to claims that the Power Holding Company of Nigeria and the independent power producers have the capacity to meet the electricity demand of consumers, but are being constrained by gas availability, investigations have revealed that the current actual generation capacity is barely 4,320 megawatts.

A report by the General Manager, System Operations, National Control Centre, PHCN, which was obtained exclusively by our correspondent in Abuja on Friday, revealed that peak electricity demand forecast stood at 10,500MW.

The implication is that even if adequate quantities of dry gas are supplied today by the international oil companies, and water at the hydro dams reach maximum levels, PHCN and the IPPs will only be able to generate 4,320MW, while 6,180MW will remain as demand for electricity by Nigerians that can not be met.

In November 2009, when it became apparent that the sector could not meet the Presidential target for 6,000MW generation set for December, officials claimed that PHCN and the IPPs could generate over 5,522MW, but were being restricted by gas availability.

They also claimed that confirmed national demand stood at 5,000MW and further blamed the oil companies for not supplying the expected quantities of dry gas, which they claimed limited generation of electricity.

But the report, which was addressed to the Executive Director, System Operations, Transmission Company of Nigeria, and titled, Daily Operational Reports, and dated Tuesday, April 20, indicated that only 652.7MW was the available capacity, which was not generated, owing to gas shortages or low water levels.

The report recorded 3667.7MW as the total peak generation for Monday, April 19, while the lowest generation was 3036.2MW.

Similarly, Shiroro had 275MW as its peak generation and 286MW as off-peak.

The report also indicated that the nation's power sector suffered total system collapse twice in February 2010 and once in March.

It also experienced a partial system collapse in January 2010.

In 2009, the report chronicled that the country recorded 19 incidents of total system collapse.

The incidents occurred once in January, twice in May and five times in the months of June and July.

It also collapsed four times in August, once in September and December.

Partial system collapse also occurred 20 times in 2009, five times in February of that year, four times in March, thrice in April and May.

Other incidents of partial collapse occurred once in the months of August, November and December and twice in October.

The incidents of total system collapse in that year occurred 10 times in June, six times in May, five times in April, thrice in March and twice in January.