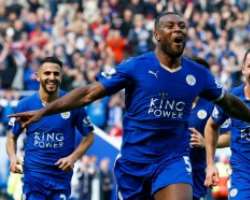 Leicester extended their lead at the top to seven points after Wes Morgan’s fist-half header earned them a hard-fought victory against Southampton .

However, Saints boss Ronald Koeman will feel aggrieved that the visitors were denied a penalty beforehand when Sadio Mane’s goalbound shot struck the arm of Leicester defender Danny Simpson.

The win means Leicester need four wins from their remaining six games to wrap up the championship. The Foxes’ incredible story keeps on going after they opened up a seven-point advantage with only six games left.

Four more wins from their final six games will guarantee them the title.

Jubilant: Morgan is mobbed by his teammates after opening the scoring

Claudio Ranieri’s men recorded their fourth successive 1-0 win and their fifth in six games with this display.

It wasn’t vintage as they rode their luck at times but just scoring against the league leaders is a feat in itself right now.