AFCON 2017: Egypt knock out Nigeria as Eagles fail to fly 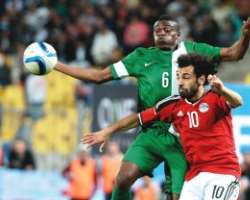 NIGERIA will not appear in next year's Africa Cup of Nations tournament in Gabon as the Super Eagles failed to produce the spark that could have earned them the ticket when they fell 0-1 to the Pharaohs of Egypt in Alexandria last night. It will be the second time in two years that the Super Eagles have failed to qualify for the Nations Cup. Egypt's Hamada Tolba (L) Nigeria's Ahmed Musa jump for the ball during their African Cup of Nations group G qualification football match between Egypt and Nigeria at the Borg el-Arab Stadium in Alexandria on March 29, 2016. It was a match that the Eagles needed an outright win as their host with four points in their kitty had a two point advantage before the encounter. Egypt now have an unassailable seven points with one match to play in June. Nigeria have a distant two points and even if they trounce Tanzania in September, they will not be at Gabon 2017. Teenager Radwan Sobhi grabbed the all-important goal in the 65th minute when his toed effort from just inside the box trickled past a sea of Nigerian legs and past goalkeeper Daniel Akpeyi. Despite their galaxy of foreign stars, Nigeria never really stretched the Egypt backline except in the 84th minute, when Victor Moses shot from outside the box came off the post with the Egypt goalkeeper well beaten. Hosts Egypt created the better chances in the first half but Nigeria also had their moments during a goalless first half at a packed Borg El-Arab Stadium in Alexandria. Nigeria played with a lot of confidence and dictated the tempo of the game for a good period of the first 45 minutes. Egypt created two early openings – Hegazy headed narrowly past the Nigeria goal after five minutes and almost immediately skipper Al-Said fired with a left foot from inside the box. Al-Said then delivered a low cross from the left in the 29th minute, but Mohamed Salah was not close to make contact. In the closing minutes of the first half, Nigeria goalkeeper Akpeyi pulled off two big saves from Ibrahim Salah and again skipper Al-Said. In the seventh minute, Umar Aminu dashed into the Egyptian goal area but his shot was firmly held by the goalkeeper. Odion Ighalo had a half chance when he controlled the ball inside the box, but he shot wide in the 15th minute. In the 86minute, Iwobi, whose inclusion brought life into the Eagles attack, set up Ighalo inside the box, but somehow the Egyptians survived this onslaught as his shot flew off a defender who threw himself in the line. That was Nigeria's last effort before the final whistle. EGYPT 1-0 NIGERIA: How Super Eagles Rated Vs Pharaohs

Put up a brave performance in what was his first competitive game for the Super Eagles. Made two brilliant saves on  39 minutes  and could do nothing to prevent the Pharaohs from scoring the winner.

SHEHU ABDULAHI 4/10
A below-par showing from the Uniao Madeira of Portugal defender. He was constantly caught out of position especially in the first half and contributed little going forward.

EFE AMBROSE 5/10
The Celtic man did well to curtail the Pharaohs  attackers, but couldn’t prevent them  from scoring the decisive goal. He  also lost possession a few times.

GODFREY OBOABONA 6/10
Solid as ever, but was  unfortunate to end up on the losing side.

STANLEY AMUZIE 3/10
Surprisingly kept his place in the starting eleven and put up a shoddy display in the game.  He was rightly substituted at the start of the second half after an error-prone performance.

OGHENEKARO ETEBO 4/10
Couldn’t replicate his first leg performance. He make little impact in the game and  was substituted due to injury.

MIKEL OBI 5/10
The Chelsea midfielder had an average game although he started well, controlling the midfield early on. He however failed to lift his side to get a positive result from the game.

AMINU UMAR 4/10
A surprise inclusion in the starting line up. Umar toiled hard to make an impression in the game with no success.

AHMED MUSA 3/10
Another horrific display from the winger. Never made any significant impact in the game for the entire 90 minutes he spent on the pitch.

VICTOR MOSES 8/10
Unarguably Super Eagles best player in the game. Came close to getting the equalising goal late in the game when his shot hit the post.

ODION IGHAL0 4/10
Yet to make an impact on the international stage. The Watford forward struggled to get going and had a poor game by his Premier League standards.

SUBSTITUTES
ELDERSON ECHIEJILE 5/10
Took the place of Stanley Amuzie at the start of the second half and did little  to change the complexion of the game.

AZUBUIKE IKECHUKWU 6/10
The defensive midfielder helped stabilise the Super Eagles midfield when he came on for the injured Oghenekaro Etebo. He surely has a big future ahead of him.

ALEX IWOBI 6/10
Brought some life into the Super Eagles attack when he replaced Aminu Umar in the 72 minute.