Pharohs of Egypt train in heavy rain for Super Eagles 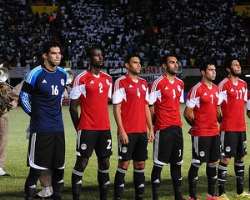 The Pharaohs arrived in Borj El Arab (an industrial city and resort in Alexandria, Egypt) on Saturday following Friday's 1-1 draw with Nigeria in Kaduna.

The session at the Borg El Arab stadium lasted for an hour and a half under heavy rains according to a report on the Egyptian Football Federation's official website, www.efa.com.ng.

Players who took part in Friday's game against the Super Eagles were separated from the rest of the squad with special drills performed on the two sets of players by Cuper and his coaching staff.

Meanwhile, veteran goal keeper, Essam El-Hadary is a doubt for Tuesday's fixture against the Super Eagles in Alexandria.

The 43-year-old Wadi Delga goal keeper sustained a calf injury in training ahead of the Nigeria game last Friday and duly sat out the contest at the Ahmadu Bello Stadium, Kaduna.

On Saturday, he had scans and x-rays performed by national team doctor, Mohammed Aboul to determine the extent of the latest injury.

The veteran shot-stopper has now commenced an intensive course of treatment within the team's camp in Borg El Arab.

He has stayed on in the camp to continue to perform his role as captain of the Pharaohs.