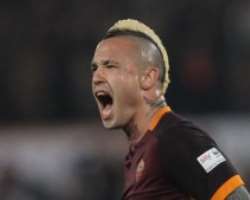 Perhaps more realistic than any talk about any Juventus player, Chelsea’s supposed interest in Radja Nainggolan continues to make headlines in the rumor mill.

While other teams are interested in Belgian international’s services, too — most notably Juventus (them again!) — Chelsea are apparently pressing forward and pushing hard to get his signature.   Gianluca Di Marzio’s report the other day claimed that Chelsea already have a “significant” financial package ready to offer the player (no specifics), while the Mail’s latest includes a transfer fee as well, £35m.

That sort of money is no chump change, especially without the extra European income.  A minor detail that’s apparently working in Chelsea’s favor over all others is Nainggolan’s image rights and popularity in Indonesia, where Chelsea also have a large following (Radja’s father is Indonesian).

SB Nation(We ain’t got no history)