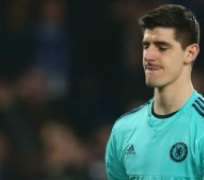 Thibaut Courtois has refused to rule out the prospect of leaving Chelsea after admitting he has been “changed” by their disappointing season.

The Premier League champions are 10 points off the top four with eight games to play, having suffered elimination in both domestic cup competitions and the Champions League.

Courtois’ contract at Stamford Bridge does not expire until 2019 but the Belgium international has suggested he could be forced to consider his future as a result of Chelsea’s barren campaign.

When asked if he will stay beyond this season, he said: “I do not say yes, I do not say no. I do not know: I still have three years on my contract. We must see what Chelsea want.

“It is true that it [this season] has changed me. Until now I had always won a trophy every season. We hope that next season will be better.”

Courtois, currently on international duty with Belgium, appears to have enjoyed his spell with Marc Wilmots’ side, claiming the training sessions are of a higher standard than those at Chelsea.

“The level of training is higher among Devils,” he said. “There are only world-class players, while at Chelsea, there are some players a little less rated and we often train with youngsters as well.”

Courtois missed more than three months of the season due to a knee ligament injury but the former Atletico Madrid loanee says he never felt that getting back to his best could prove difficult.

“Especially mentally, you have to be strong,” he said. “But with my character, and having grown up in a family of top athletes, I do not have too many problems with it. I never doubt.”