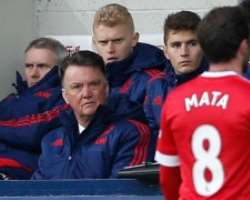 Louis van Gaal accused Juan Mata of picking up a “stupid” first booking prior to his dismissal in the 1-0 defeat at West Bromwich Albion but the Manchester United manager suggested that Mike Dean, the referee, should have showed more discretion before brandishing a second yellow card to the Spaniard little more than two minutes later.

Mata's extraordinary dismissal in the 26th minute, following two incidents involving Darren Fletcher, the former United midfielder, was the turning point in the game according to Van Gaal, who conceded that his team had now “lost contact” with the top five clubs in the Premier League in their pursuit for fourth place.

Salomon Rondón's second-half goal leaves United sixth, two points behind West Ham United and three points adrift of Manchester City, who also have a game in hand on their neighbours. The spotlight, however, fell on Mata after he was cautioned twice in the space of 158 seconds, first for preventing Fletcher from taking a quick free-kick and then for fouling the same player.

“What can I say when you send off a player like Mata? I have asked him if it's his first red card and he said: 'Yes,'” Van Gaal said. “When you do that you give the first and second yellow within five minutes. You can do it according to the rules but I think the referee has to know the person doing it. I don't think Mata has ever made bad tackles.

“You know the first one is a stupid yellow card and then you have to be aware the referee can give a second yellow card. A referee has to decide within one second but when you know the player, Mata never hurts a player.”

United had dominated possession with Mata on the pitch without creating anything and they rarely looked like scoring once down to 10 men. “We have played 60 minutes with 10 against 11 and that is always difficult, but we were not uncomfortable,” said Van Gaal, who later bemoaned United's fixture schedule.

“The [sending-off] decision was for us the turning point in the match. They scored out of three chances, fantastic, but for us it is a big disappointment. A bad moment and it was, in my opinion, an unnecessary loss. I don't want to say that we deserved to win, but we did not deserve to lose, when you see at the end the chances that WBA created in comparison with us. But now you lose, and lose contact with the first four or five.”

Tony Pulis, West Brom's manager, felt some sympathy for Mata. “The sending off played a big part in the game,” said Pulis, whose side are now up to 11th and surely safe from the threat of relegation. “From where I was the second one looked a bit harsh, but I've just been told that he does catch Darren and obviously Mike has deemed it to be two yellows.”