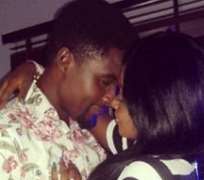 Hurray!!! Handsome Nollywood actor and estrange husband to Toyin Aimakhu, Adeniyi Johnson, is about settling down again with his new found love.

Recall that earlier in the year, the actor had shared the back view picture of a lady so dear o him and wrote that with time her face will be revealed, well, it seems all is now set for that as emerging pictures shows the actor proposing to a lady which is mostly likely the lady he promised to reveal.

This is coming barely few days after his wife, Toyin, had wished him happy birthday and started following him back after she had blocked him on her social media pages. But Niyi as he is fondly called is not moved by such actions.

Although, Niyi is yet to confirm if this proposal is real or a shot from a movie location but considering the closeness, there could be possibilities that the proposal is for real.