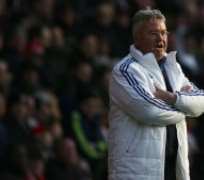 Chelsea manager Guus Hiddink was delighted with the reaction of his players after they came from behind to beat Southampton 2-1.

Guus Hiddink hailed Chelsea’s reaction after they completed a dramatic late turnaround to claim a 2-1 Premier League win at Southampton.

Hiddink saw his side fall behind in the 42nd minute at St Mary’s on Saturday as Baba Rahman’s poor defensive header was pounced on by Shane Long.

Rahman was brought off at half-time and Chelsea subsequently dominated in the second period, getting their reward in the 75th minute as Cesc Fabregas beat Fraser Forster – who had earlier set a Southampton record for top-flight minutes without conceding – with a cross-cum-shot.

That goal marked the first Forster had conceded in the league in 708 minutes, and there was a final twist in the tale in the 89th minute as Branislav Ivanovic headed home the winner from Willian’s corner.

Hiddink, whose side have now gone 11 league games without defeat, told Sky Sports: “I think we started rather difficult in the first 20 minutes but then we got the composure and we got the control in the first half. I think we should have scored already with our dominance.

“They [Southampton] got a goal, a present from defence, so we got a setback.

“The team reacted very well, normally the defensive-orientated player, they always react in the spirit, but also what we emphasise on is the naturally gifted player, they must work also. They must do the dirty work in their positions and they’re willing to do so.

“We got some results in draws [early in Hiddink’s tenure] and that was necessary because the team lacked confidence.

“They’ve now started playing and we said ‘hey we have to go not just in draws being unbeaten but also going into wins’ and that’s why we are very happy in Southampton because, if you see their record, it’s impressive.”

On the decision to take off Rahman, Hiddink added: “When a defensive player makes an error then it’s dangerous. He was taken off, that’s the consequence sometimes. Sometimes you have to take decisions, young Kenedy came in and he did a rather good job.”