I will recall Enyeama, Emenike to Super Eagles: SiaSia 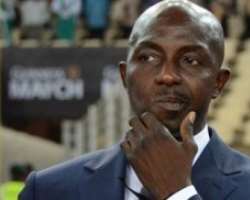 Super Eagles' Interim Head Coach Samson Siasia on Friday said that assured that he would readily recall both Vincent Enyeama and Emmanuel Emenike, who had announced their retirement from Super Eagles over disagreements with Sunday Oliseh who has resigned as the Super Eagles Chief Coach.

Siasia said that with depth of experience of the consortium of coaches put together for the team he was hopeful the Eagles would  secure a 2017 Africa Cup of Nations  ticket.

He spoke in an interview with newsmen in Abuja shortly after the Technical and Development Committee of the Nigeria Football Federation announced his appointment.

The Beijing Olympics silver-winning coach is to work with  2015 FIFA U-17 World Cup winner Emmanuel Amuneke, as well as Salisu Yusuf and Alloy Agu.

Yusuf, as Assistant Coach 2, and Alloy Agu, as Goalkeepers Trainer, had served under Sunday Oliseh who quit earlier on Friday.

“It is an emergency assignment. If they (the NFF) say we should do the rescue job, we have to do it for the sake of Nigeria. “We will go for the best legs. I mean players with commitment, to ensure that we qualify ahead of Egypt.

“We will look at the players we believe can help the team, including Vincent Enyeama and Emmanuel Emenike who retired from the team last year. The coaching crew will sit down and make up the list, and the Egyptians must fall as far as we are now in charge,'' Siasia said.

Siasia  will lead in the crucial AFCON qualification double header with Egypt first on Mrch 25.

Siasia steered the Nigerian under-20 team to the African title in 2005 and led the team to the runner-up spot at the FIFA U-20 World Cup in The Netherlands the same year. He also led the under-23 team to the silver medal in the men's football event of the 2008 Olympics in Beijing, China. Two months ago, he had led Nigeria to win the Africa U-23 Cup of Nations in Senegal which ensured the country's qualification for this year's Olympics in Rio, Brazil.

As Super Eagles players, Siasia and Amuneke both scored as Nigeria achieved an impressive debut at the FIFA World Cup in the U.S. in 1994. Amuneke scored against Bulgaria and Italy, while Siasia scored against Argentina. Amuneke also scored the two goals as Nigeria edged Zambia to win the AFCON for the first time on away soil in Tunisia in 1994. He also scored the winner as Nigeria defeated Argentina to win Africa's first Olympics football gold in the U.S. two years later.