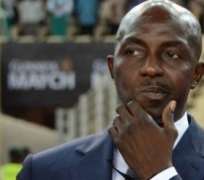 Super Eagles Coach Sunday Oliseh resigned on Friday, leaving Nigeria Football Federation scampering for urgent initiative to save the country from embarrassment ahead of a double header with Egypt as from March 25.

According to Siasia, Nigeria still stands a chance of qualifying for the 2017 Nations Cup and the 2018 World Cup.

He believes the task ahead of him and his technical crew is acheivable.

His said, “I know the task is huge after SundayOliseh ran away from the job. I'm still thinking on how to approach it but we would make sure that the invited players give 120 per cent in the games.

“For me, it is a great honour to serve the country and I want to plead for everybody's support in our quest to qualify for the Nations Cup because Nigeria must be at the tournament.”

Siasia also revealed that a communication channel aimed at conditioning the players mind for the task ahead has been opened and would make public the list of players that would prosecute the all-important qualifying ties against the Pharaohs of Egypt.

He said: “I hope to meet with the technical committee of the NFF soon and look for the best possible means to make Nigerians proud.”

SiaOne, as he is fondly called, had guided Nigeria to Olympic silver medal.

He will be assisted by Salisu Yusuf, Emmanuel Amuneke and Alloy Agu.