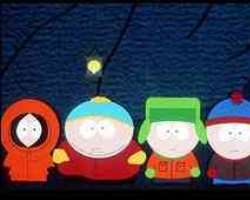 South Park has a track record of causing controversy

Islamists have warned the creators of TV show South Park they could face violent retribution for depicting the Prophet Muhammad in a bear suit.

A posting on the website of the US-based group, Revolution Muslim, told Matt Stone and Trey Parker they would “probably wind up like Theo Van Gogh”.

The Dutch film-maker was shot and stabbed to death in 2004 by an Islamist angered by his film about Muslim women.

A subsequent episode of the cartoon bleeped out references to Muhammad.

It also listed the addresses of their production office in California and the New York office of South Park's broadcaster, Comedy Central.

“We have to warn Matt and Trey that what they are doing is stupid and they will probably wind up like Theo Van Gogh for airing this show,” warned the posting, written in the name of Abu Talhah Al-Amrikee.

“This is not a threat, but a warning of the reality of what will likely happen to them,” it added.

Mr al-Amrikee later told the Associated Press the posting was not an incitement to violence. It had been published to raise awareness of the issue and to see that it did not happen again, he added. This is not a threat, but a warning of the reality of what will likely happen to them

Abu Talhah Al-Amrikee
A Comedy Central spokesman said the network had no comment.

In the 200th episode of South Park, broadcast in the US and UK last week, Muhammad appeared several times inside a bear suit. Figures from other religions were also depicted, including a drug-snorting Buddha and Jesus watching pornography.

Wednesday's 201st episode saw any spoken references to Muhammad bleeped out, while a prominent banner stating “censored” was used in the programme.

The images of the prophet in a bear outfit were substituted with Santa Claus in the same costume.

Speaking in an interview with the Boing Boing website before the 200th show aired, the South Park team defended the scenes.

“We'd be so hypocritical against our own message, our own thoughts, if we said, 'okay, well let's not make fun of them because they won't hurt us,'” said Parker.

“It matters to me when we talk about Muhammad that I can say we did this… and I can stand behind that,” Stone added.

“I don't think it's going to change the world, but this is how it's got to be for our show.”

In 2006, Comedy Central banned Stone and Parker from showing an image of Muhammad in an episode that was intended to be part of a comment on the controversy caused by the publication of caricatures of the prophet by a Danish newspaper.

An earlier episode, Super-Best Friends (2001), contained an image of Muhammad but passed without comment.

“It was before the Danish cartoon controversy, so it somehow is fine,” Stone told Boing Boing.

“Then, after that, now that's the new normal. We lost. Something that was okay is now not okay.”

Muslims consider any physical representation of their prophet to be blasphemous. The caricatures published in Denmark sparked mass protests worldwide.