Juventus storm back to grab 2-2 draw vs Bayern Munich 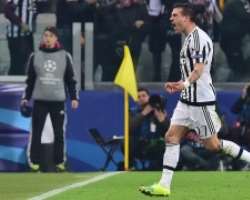 Juventus came from two goals down to earn a 2-2 home draw in the first leg of their Champions League last-16 tie with Bayern Munich.

Goals from Thomas Müller and Arjen Robben either side of half-time looked to have put Bayern in control of the tie. But Paulo Dybala pulled one back and the substitute Stefano Sturaro equalised to ensure Juventus will go into the second leg on 16 March with optimism.

The pre-match team news focused on both team's defences, with Juve switching to a back four in the absence of Giorgio Chiellini while injury-hit Bayern paired the inexperienced Joshua Kimmich with the versatile David Alaba in the centre. The full-back Philipp Lahm made his 100th Champions League appearance.

Mario Mandzukic scuffed an early shot for Juve before, at the other end, a rather better-struck 25-yard volley from Arturo Vidal was beaten away by Gianluigi Buffon. Mandzukic stretched to reach strike partner Dybala's cross but could only divert the ball over the bar.

Bayern missed an extraordinary opportunity in the 13th minute when Lahm cut the ball into the box and Robert Lewandowski drew the keeper but squared the ball behind Müller, who could not get the ball out of his feet and his weak shot was cleared off the line by Leonardo Bonucci.

Read more
Vidal got away with a possible handball when Paul Pogba stabbed the ball into the Bayern area.

Robben fired over from the right side of the penalty area before Müller was again unable to bring the ball under control in the box.

Bayern continued to dominate, though, and it told before half-time as Costa's volleyed cross deflected off Andrea Barzagli and Müller stroked home.

Advertisement
Massimiliano Allegri sent on Hernanes for Claudio Marchisio at half-time but the desired impact was not forthcoming as Robben made it 2-0 10 minutes into the second period. Thiago Alcântara's pass sparked a three-man breakaway and Lewandowski, who got away with a foul on Bonucci in the buildup, used Müller as a decoy and fed the winger, who cut inside and curled a left-foot shot around Bonucci and Buffon.

Dybala saw a free-kick deflected over the bar but the Bayern pressure kept coming and Lewandowski sent a diving header wide.

Out of nowhere, though, Juve pulled a goal back when Kimmich's error presented the ball to Mandzukic and he slid it through for Dybala to take a touch and finish.

Mandzukic was fortunate to escape punishment after twice pushing his head towards Lewandowski as the two squared up but it did not disrupt Juve's new-found rhythm, Juan Cuadrado denied by Manuel Neuer's fingertips and Pogba curling just over.

Allegri sent on Sturaro in the 69th minute and Alvaro Morata in the 75th and these changes paid off immediately, as Morata headed Mandzukic's pass nicely across the six-yard box for a lunging Sturaro to finish via the crossbar.

Barzagli cleared Robben's cross away from Lewandowski and when Muller delivered from the other side, it was just too far in front of the Poland striker. Mehdi Benatia then headed over from Thiago's corner.

Bonucci's shot was straight at Neuer and the Bayern substitute Franck Ribery, who on Sunday returned from 11 months out, was unable to pick out Lewandowski as the match finished with no further score.