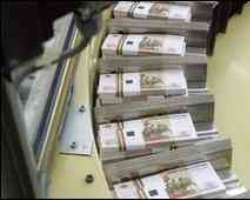 The fund-raising should help rebuild confidence in Russia's finances

Initial reports said that demand for the Eurobond was five times over-subscribed despite investors' growing caution about government fund-raising.

The Eurobond was split between a $2bn issue repayable in five years, and $3.5bn in ten years.

“The placement is rather a success,” said Nikolay Podguzov, analyst at Renaissance Capital in Moscow.

Final pricing is expected later on Thursday, and it is possible that Russia could raise more than $5.5bn.

Demand for the Eurobond was high as some investors believe economic growth in Russia could now be stronger than elsewhere in Europe and the US.

Default
Russian Finance Minister Alexei Kudrin has said that the growth of the country's total economic output, as measured by gross domestic product (GDP), might reach 4% this year, more than the initial official forecast of 3.1%.

The success of the fund-raising is seen as another step towards re-building investors' confidence in Russia since it defaulted on $40bn of debts 12 years ago.

Standard & Poor's ranks the country one level lower than Moody's, at triple-B, though still potentially attractive to some professional investors.