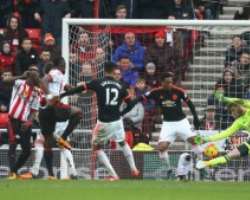 Sunderland beat Manchester United 2-1 at the Stadium of Light as two January signings made the difference in a huge win for the Black Cats.

Wahbi Khazri gave Sunderland the lead early on but Anthony Martial equalized before half time with a superb finish. In a second half which Sunderland edged, Lamine Kone headed home late on (the goal later went down as a David De Gea own goal) to send the home fans wild.

With the three points Sunderland move to within one point of safety on 23 points following Sam Allardyce 's first-ever home win against United, while the Red Devils stay six points off the top four and Louis Van Gaal 's tenure is becoming increasingly untenable.

A frantic start saw Sunderland take the lead with Khazri scoring less than 10 minutes into his home debut to put the Black Cats 1-0 up.

The Tunisian playmaker whipped in a harmless looking free kick from the left which went towards Defoe and as he attempted to flick the ball goalwards but missed, the skip off the service deceived De Gea and nestled into the far corner.

Less than 15 minutes in Sunderland had to make a change as defender Jan Kirchhoff was forced off with a hamstring injury and  Jack Rodwell replaced him. Anthony Martial continued to be United's brightest attacking talent as Rooney couldn't quite get on the end of his teasing cross.

As half time approached Sunderland looked dangerous on the break with Khazri curling a shot over and then having a penalty appeal turned down after his shot struck Morgan Schneiderlin 's arm in the box. At the other end Juan Mata sent a harmless shot towards goal which Vito Mannone saved easily.

Before the break United also had to make a change with Donald Love coming on for his debut and replacing the injured Matteo Darmian . Moments later USMNT international DeAndre Yedlin — who had been dealing with the threat of Martial well — was first booked for blatantly diving and trying to win a free kick, then United were level. Mata's shot was saved by Mannone by Martial lost Yedlin and delicately dinked the ball home. 1-1. Game on.

In the second half United looked to take control but Sunderland had a great chance to go ahead when Patrick Van Aanholt got behind Love and his cross almost found Jermain Defoe but Daley Blind 's last-ditch tackle denied him.

A big chance arrived for Sunderland just after the hour mark when Dame N’Doye was set free but De Gea's outstretched leg denied him to keep the scores level.

United regrouped and increased the pressure late on as Mata's shot was blocked well by Rodwell, Chris Smalling had a header deflected wide and then Memphis sent a shot right at Mannone after good work from the impressive Cameron Borthwick-Jackson .

Kone then rose highest in the 83rd minute and headed home Khazri's corner from the right which a combination of De Gea and Martial couldn't clear. 2-1 to the home side.

Memphis then forced Mannone into a fine stop and had another effort blocked by John O’Shea late on but United couldn't grab an equalizer and the “Van Gaal out” brigade is growing stronger by the day.