I'll correct Wenger's mistakes when I meet him on Sunday: Raneri 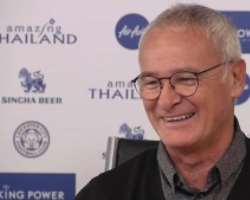 by Omnisport Video 1:00 mins
Claudio Ranieri pointed out Arsene Wenger was wrong to say he’d never lost to a team managed by the Italian, and vowed to remind him of their 2004 Champions League meeting when Leicester face Arsenal on Sunday.

‘He makes mistakes. He make mistakes. The last time I met him I beat him 2-1 in Champion’s league and In Quater Finals with the Chelsea. And when I meet him on Sunday I will remind him. Winebrige scored a goal, he said in Omnipreent video in response to the reporter’s questions.