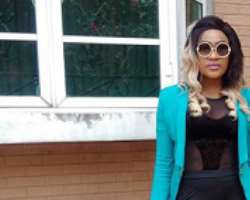 Nollywood actress, Lizzy Gold Onuwaje, is seriously not happy with the high rate of robbery incidents in the country as she was recently robbed while in Delta state.

The actress explained that she was recently in Delta state and decided to stop by a shopping mall only to return to meet the door of her car open and her Blackberry Passport was gone.

She stated that what is disturbing her most is the fact that she had to go get another one which is expensive as she would have used the money for something else.

“Warri I hail o. Ten days ago I stopped by a mall in Warri to get some things, when I returned I met my car door opened and my blackberry passport in my car was stolen. I guessed they used master key to gain entrance. I was terribly hurt because I had to get same phone for a higher price that money could have been used for something else. I encourage savings and not the other way round,” she said.