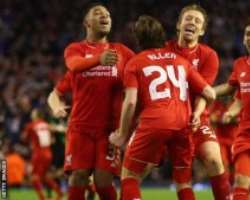 Liverpool won a penalty shootout against Stoke City at Anfield to reach the Capital One Cup final as manager Jurgen Klopp ensured his first season in charge will bring a trip to Wembley.

Marko Arnautovic scored for Stoke to claw back Liverpool’s one-goal advantage from the first leg – but it was agony for Mark Hughes’ side when it came to spot-kicks.

Much-criticised Liverpool goalkeeper Simon Mignolet was Liverpool’s hero with saves from Peter Crouch and Marc Muniesa, allowing substitute Joe Allen to step forward to secure a meeting with either Manchester City or neighbours Everton at Wembley on 28 February.

A tight encounter was sent to penalties by Arnautovic’s goal, scored from a clearly offside position, in first-half stoppage time.

Jurgen Klopp has endured mixed fortunes since his appointment as Liverpool manager in early October – but now he has the chance to smooth an inevitable period of transition with success.

Some may not regard the League Cup as the biggest domestic prize but it gives the charismatic German the opportunity to cement his reputation with silverware and also give Liverpool their first trophy in four years, since they won this competition under Kenny Dalglish’s management against Cardiff City in 2012.

He would also be following the example of Jose Mourinho at Chelsea and Manuel Pellegrini at Manchester City, who each won this trophy during their first season as a manager in England.

Klopp can build on his impact since his arrival in England at Wembley, where he led Borussia Dortmund to Champions League final defeat against Bayern Munich in 2013.

Liverpool keeper Simon Mignolet has often been the villain of the piece in a season of uncertain form – but here he was the hero with vital penalty saves from Crouch and Muniesa.

The Belgian’s Achilles heel is his decision-making, and there were some raised eyebrows when he was recently handed a new five-year contract.

Mignolet rewarded the faith of Klopp, who has been steadfast in his support for the keeper, with the most significant interventions here and will hope to build on this dramatic revival of his fortunes.

A banner fluttering in the Anfield Road End among the massed ranks of Stoke fans called on their players to summon “The Spirit Of 72″ – when they secured their first and last major trophy with with a League Cup final win over Chelsea at Wembley.

And for spells after Arnautovic’s goal, it looked like they would get the chance to join the ranks of heroes such as Gordon Banks and George Eastham as they took the fight to Liverpool with this semi-final second leg delicately poised.

Hughes must have been almost as exhausted as his players at the painful conclusion, contesting every decision and urging his men on for 120 minutes.

Sadly for Stoke and their thousands of fans, it was not to be. But the mature performance they gave in winning at Anfield, their first victory here since 1959, was another indicator of their growing maturity despite the disappointment of defeat.