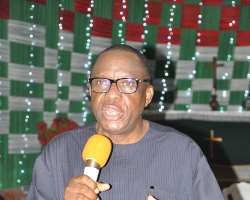 The deputy chief whip of the senate and senator representing Edo North Senator Francis Alimikhena has caution politicians in Edo State against unguarded utterances ahead of the 2016 governorship election so as not to heat up the polity.

Some unguarded Statement by some prominent politicians in the state was capable of inciting people. We must be careful as major actors in the polity to avoid making some loose utterances that could unwittingly incite the generality of the public and create hostility all over the state.

In a press statement made available by his Media Assistant Benjamin Atu yesterday when Senator Alimikhena played host to the Abuja chapter of Usagbe and Afemai community in his Abuja resident weekend. The deputy chief whip of the senate express worry over the way some governorship aspirant and party supporters open their mouth to yell out the most explosive stuff at the top of their lungs against the governor of the state and party leadership.

Election is not a personality struggle. It is a challenge between political parties and not political opponent. The way and manner politicians seek after their ambition has change the perception of the public who perceive politics and politicians as the route to social redemption. Power belongs to God. Desperation and condemnation does not enthrone a leader.

Senator Alimikhena who said he has lost election severally before he won his senatorial election took a swipe at the peoples Democratic Party (PDP) in Edo State saying the leadership of the opposition has lost focus and has nothing to offer due to their inability to perform in their years of ruler ship both at the state and federal level. Alimikhena pleaded with the people of the state not to be carried away by hath campaign of the opposition party in the state stressing that the people of Edo State should vote against bad leaders.

Unless Edo people rose against bad leadership and installed leadership that is passionate like our comrade governor, the state would not make headway. According to him, until we have leaders with ability, integrity, commitment, and vision, we cannot succeed as a state. We need functional leadership not the kind of leadership that was provided by the PDP in Edo State without anything to show.

He warned that a vote for PDP in the forth coming governorship election will return the state back to bondage where corruption was the badge of honor. The deputy chief whip of the senate also caution persons planning to use hath campaign or use ethnic sentiments to get into political office to desist forth with as it would not yield them the desire result.

The Edo North leader, appeal to the APC governorship aspirants to be their brothers keepers and endear themselves to the people by their words, deed, and actions reiterating that the All Progressive Congress is determined to set a standard by ensuring that all aspirant are given equal opportunity in the forth coming governorship primary election. APC is the party to belong. All aspirants within the party should work together as one big family knowing that any one among them will become the next governor. He pleaded with politicians not to join the opposition party in hath campaign against Governor Adams Oshiomhole who he describe as the game changer and the most productive governor in the nation.