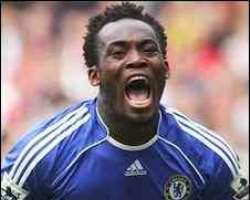 Chelsea's Michael Essien is unlikely to play for the Premier League leaders again this season after being ruled out of the visit of Stoke City on Sunday.

Essien has been sidelined since tearing a hamstring against Apoel Nicosia in the Champions League in December.

The 27-year-old then hurt his knee on international duty at the Africa Cup of Nations in Angola in January.

A Chelsea spokesman said: “The Ghanaian's participation in the remainder of the campaign is in doubt.”

Essien had only been expected to be out for six weeks after suffering the second injury while on international duty with Ghana.

It was anticipated that he would make his comeback for Chelsea for the visit of Inter Milan in the second leg of their Champions League last-16 tie on 16 March.

But the midfielder's knee continued to swell-up and the player underwent four lots of surgery inside a fortnight.

Chelsea have Stoke, Liverpool and Wigan still to play in the league this season, and Portsmouth in the FA Cup final at Wembley, but Essien could now miss them all.

Essien is still expected to be fit to play for Ghana in the World Cup this summer.