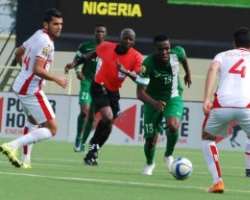 Nigeria and Tunisia went a way with a point each after a pulsating 93 minutes of action.

This leaves Nigeria’s home based Eagles atop the group with four points, followed by Tunisia on two points, Guinea are still holding on to one point from their first match against Tunisia, while Niger would be hoping to pick at least a point against them later today.

Qualification from Group C will be open until the final day of proceedings.The match was played  in Kigali on Friday. It was Nigeria's Chisom Chikatara who drew the first blood  in the 52nd minute to put the eagles ahead until Ahmed Akaichi cancelled out the goal with a 70th minute equalizer, which resulted largely from sloppy defending by the Nigerian lads who would secured a place to the next stage had they achieved an outright victory.