Playing time: Iheanacho wants to do his talking on the field 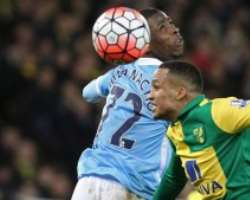 Manuel Pellegrini is unlikely to have prolific young striker Kelechi Iheanacho banging on his door asking for more games at Manchester City.

Manchester City youngster Kelechi Iheanacho does not feel it would be right to demand more first-team action from manager Manuel Pellegrini.

Iheanacho averages a goal every 61 minutes at senior level for City despite only having a solitary Premier League start to his name.

There is a growing clamour among the club’s supporters for the Nigeria international to play a more prominent role as their title bid under Pellegrini struggles for consistency, but Iheanacho is keen to do his talking on the field.

Asked whether he talked to his manager about the prospect of playing more games, Iheanacho told City’s official website: “Not really because as a young player you have to work hard in every training session and if you are given the chance to play you have to show the manager that you deserve to be in.

“I think nothing is enough in football. I will keep working hard, I will keep giving my best every day and in every game.

“Every day I will keep learning from the professionals in my team.”

One man Iheanacho is particularly keen to learn from is Sergio Aguero.

The Argentina star scored his 11th goal of the season with a superb solo effort at Carrow Road before setting up his strike partner for a clinically taken second.

“It was a great goal, it was a good pass from Sergio and I was about to control the ball but I thought I should hit it first time.

“It was a great goal and a great assist from Sergio.”

Having waited more than three months for a domestic win away from home, victory at Norwich followed up a 2-1 Premier League triumph at Watford last weekend.

Although these wins were punctuated by a 2-1 loss to Everton in the League Cup semi-final first leg at Goodison Park, Iheanacho hopes City’s travel sickness is behind them as they battle for trophies on four fronts.

“We are still in the four competitions, I think we will go far this season. We will keep working hard for each other in every game.”