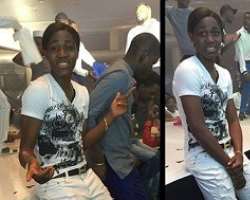 Nigerian rapper, Olamide, through his concert held over the weekend, brought lots of celebrities, top government officials together to wine and ease of the stress.

Super Falcons star Asisat Oshoala took opportunity of her winter break to fly to Lagos where she attended the concert.

The Liverpool striker is in Lagos where she is spending her mid-season break and she shared a photo herself in the concert.