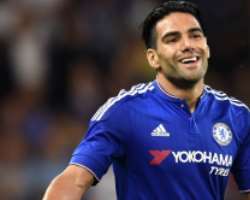 The 29-year-old striker has started just one Premier League game and scored one goal since joining the Blues on a season-long loan from Monaco.

Falcao also struggled on loan at Manchester United last season but, following Chelsea’s sacking of Jose Mourinho, he hopes he will be afforded more game time.

“Chelsea showed faith in me and opened their doors for me,” Falcao told Colombia’s Hola! magazine.

“But it has been complicated for me so far, because the team hasn’t started in the best way, while I have not had the opportunities I want, either.

“I am very grateful to Chelsea, though. I am satisfied and I am confident that I will get my chances in the second half of the season and succeed in the end.”

Falcao scored four Premier League goals in 26 appearances for Manchester United last term and was heavily criticised before Louis van Gaal opted not to make the loan deal permanent in the summer.

Falcao said: “I had a learning moment at Manchester United. I did not get the playing time and consistency I was looking for, but my time at United helped me grow.

“The move came shortly after my knee injury and my surgery, but I got the chance to play alongside some great players.

“It made me stronger, prepared me for the future and become more consistent.”