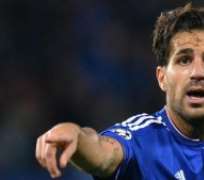 Ex-Chelsea man Pat Nevin has made it clear Cesc Fabregas was not the player who attempted to sabotage former manager Jose Mourinho.

Pat Nevin has called for harsh treatment of Cesc Fabregas by Chelsea fans to stop and denied that he claimed the Spaniard had claimed he would rather lose games with Jose Mourinho as manager.

Fabregas was jeered by the Chelsea fans during this weekend’s 3-1 win over Sunderland after Nevin was adjudged to have outed him as one of the players who sabotaged former manager Mourinho.

Reports on Monday claimed Fabregas is ready to take legal action against Nevin following his comments, but the 52-year-old has now claimed he was misunderstood and did not mean to wrong the former Arsenal star.

“When a story appeared in one of the newspapers it was reported as if I was deliberately outing Cesc,” Nevin wrote in his weekly column on Chelsea’s website.

“Now whether it was mischievous on the newspaper’s part for deliberately misunderstanding me or whether I was not clear enough in what I was saying and the fault was thus partially mine, it doesn’t matter.

“In short, I did not mean to have a go at Cesc in any way at all; I was merely asking a question.

“During an interview with BBC Radio 4 I asked if the player who said the phrase six weeks ago: ‘I would rather lose than play for Jose,’ had been outed in the press as Cesc? I absolutely wasn’t having a go at Cesc, but asking the question, as the reporter I was talking to was the one who originally broke that story.

“I called the original Radio 4 reporter and he obligingly told me that it definitively was not Cesc who was the culprit.

“So, deep breath, when Cesc got a negative reaction as he was substituted on Saturday, if any of that was anything to do with what I was reported to have said, first I am sorry to Cesc, I absolutely didn’t mean that at all, it was misconstrued, but nonetheless I apologise.

“Secondly, I plead with the fans they adapt that reaction for the upcoming games. Cesc has released a number of statements of late that have been brave, honest and self-deprecating. He has been badly wronged and he didn’t deserve that on Saturday, full stop. I hope that is crystal clear.”