Louis van Gaal may face the sack if United lose over Christmas: Report 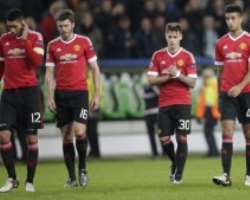 The Independent is running an exclusive story which states that Louis van Gaal is one defeat away from being sacked as Manchester United manager.

The Dutchman's side slumped to a 2-1 home defeat against Norwich City on Saturday, and have managed just seven shots on target in their last four games.

Despite Van Gaal claiming after the Norwich defeat that he retains the backing of his players, the Independent is aware of senior figures within the dressing room who have grown tired of the Dutchman's approach, both in terms of tactics and a perceived obsession with critical post-match analysis in “evaluation” sessions overseen by performance analyst, Max Reckers.

– The Independent
United supporters have voiced their anger at the recent performances by booing Van Gaal and the team, and the form of Javier Hernandez at Bayer Leverkusen has done little to maintain faith in the current regime's transfer strategy.

Hernandez was sold to the Bundesliga side in August for a few of around £7.3 million and has scored 19 goals in 22 games in all competitions.

Should Van Gaal get the bullet then Jose Mourinho could step into the void, and the Portuguese has already made it clear that he fancies the gig.

United's two games over the festive period are away to Stoke City on December 26 and at home to Chelsea three days later.

Do you think that it's time for Louis van Gaal to leave Old Trafford? Vote in our poll below or leave your thoughts in the comments section.