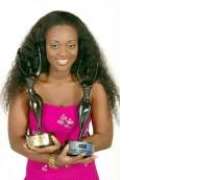 It's indeed a golden age for actress,Jackie Appiah, as she continues to be on the rise, following her recent 'Best Actress in a Leading Role' honour at the just concluded African Movie Academy Awards (AMAA), held in Yenagoa, Bayelsa State capital, for her role in Perfect Picture.'The Ghananian actress who played the role of a flustered wife, battling with sexual incompatibility with her new husband, has described her new achievement as exciting and a beautiful feeling.

The prolific, young and beautiful actress is not new to the AMA Awards; in 2007 she won the 'Best Actress in a Supporting Role' for her role in Beyonce and was nominated the following year for 'Best Actress in a Leading Role' for her role in Princess Tyra. No doubt about it, winning the award this year brings a good sense of achievement and growth for her. “It was a beautiful feeling and I'm just so happy. It shows that God is on my side and people are out there watching my works and appreciating what I do”, she comments.

Jackie hopes that this achievement would take her career to the next level. “Being the queen for the African Movie Academy Awards in 2010 as Best Actress comes with a lot. Yea, probably my fees will go higher a little; let's see. But I will choose good scripts, good movies, good directors, and good crews. I will ask for good cast; I will make sure I know whom I am working with”. She explains.

Our source confirmed to us that jackie recently finished shooting a production alongside Nigerian sensation, Yemi Blaq in which she plays the role of a female rapper. There is certainly a lot more to come from the reigning queen of African cinema.

It is indeed palpable that Jackie's victory was a well deserved one, as no one could bemoan her flawless victory.