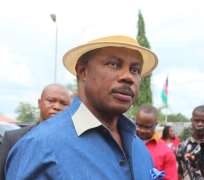 There are political leaders whose actions and speeches lend new depths to our democratic experience; whose body language raises the expectation of the people. These are leaders who have since accepted the wisdom in the saying by Mahatma Gandhi, leader of Indian independence movement, that “the best way to find yourself is to lose yourself in the service of others.” Since he took the oath of office to lead Anambra State on March 17 last year, Chief Willie Obiano has worked his way to this small tribe of leaders; the merchants of hope.

Now, anyone who watched the joyous tears of some of the 25 prisoners he granted amnesty to mark Nigeria’s 55th Independence anniversary on television the other day would not consider this article another praise song. Truth be told; we have seen state pardons of convicts before. But we have not heard of prisoners given amnesty in one hand and N1m in another, to help them repossess their lives. And that is exactly what Governor Willie Obiano has done. One of the prisoners who could muster enough self-possession to express himself, was full of praises to the governor for giving him a chance to live again. Others were so astounded they lost use of their tongues.

Earlier in an address to mark the Independence Anniversary, Governor Obiano had mounted a compelling rhetoric on hope; arguing that Nigeria is bigger than all her challenges and that he had no doubt that the sun would rise on Nigeria someday soon. “Although the price of oil is still down in the international market, our hopes shall not fall. Though insurgents and violent criminals still prowl the land, our dreams shall never die. Although we may not always agree with each other, the basis of our union shall withstand the test of unity,” he had declared to a rousing applause at the Alex Ekwueme Square. He had also explained that it was along with this new vista of hope that he had decided to give hope to some Nigerians who needed it most by exercising his prerogative of mercy in granting amnesty to the 25 prisoners. The only convict who could muster enough composure to talk simply blurted, “My heart is full of joy. I cannot express it. Only God knows how I feel.” In his fragmented speech, it was evident that he was glad to have his life back again. And that is what leadership at its best should do; give life back to the people. It is not enough to preach hope. It is more profound to GIVE hope and Willie Obiano has amply demonstrated this with that unprecedented gesture.

Interestingly, the independence anniversary gesture is just one of several little acts of kindness that have continued to humanize the face of Willie Obiano’s leadership in Anambra State. A few weeks earlier, Governor Obiano had touched lives differently. He had invited the widows and survivors of the twelve men who were slain by Boko Haram in Mubi, Taraba State in January last year and handed scholarships to their children. These were people who had been forgotten since that dastardly act that plunged the whole of Adazi Nnukwu and the entire state into mourning. But Obiano has given the children of these innocent victims a second chance. He also gave the same chance to the children of Engr. Chike Okoli, a former Commissioner for Science and Technology in the state who was slain by kidnappers. But even before all these, Governor Obiano had made education free to all physically challenged children in the state; ensuring that no Anambra child is denied a chance to find fulfilment through learning by the fact of their physical disability.

While it may not be clear whether Governor Obiano has integrated Bob Kerry’s view that “unexpected kindness is the most powerful, least costly, and most underrated agent of human change,” into his philosophy of leadership, it is important to recall that in March this year the governor had generously donated his salaries to charity. Long before President Buhari and Vice President Osibanjo had accepted a slash in their salaries in response to the economic difficulties in the country, Obiano had directed his Principal Secretary, Mr Willie Nwokoye, to ensure that all his salaries as the governor of Anambra State were spent in giving meaning to the lives of underprivileged people in the state. The beauty of that particular gesture is that it was done without fanfare, without the figurative trumpet blast that is typical of Nigerian public giving.

But to anyone with discernment, it is not difficult to link Obiano’s donation of his salaries to the underprivileged to his humane increase of workers’ salaries at a time when the prevalent economic downturn in the country had given other governors a perfect alibi to dispossess their people. They both sprang from the same well. Inside Governor Obiano’s heart lies a fountain of kindness; a pool of compassion or perhaps a small voice that echoes Delai Lama’s famous declaration; “my philosophy is kindness.”

This may well be part of the reason why Obiano had set up a home for the rehabilitation of the mentally unhinged people in Nteje, Oyi Local Government Area of the state. This facility picks up people with a mental illness from the streets for rehabilitation and eventual re-union with their families. The inmates of the home are treated until they come out of their mental state. Then a rigorous process of rehabilitation and re-orientation ensues, after which they are re-united with their families. The story is often told of a former inmate from Edo State who has become a source of inspiration to other inmates. Obiano demonstrated a commendable presence of mind and a remarkable compassion in setting up this facility. He has once said that he is not just the governor of the rich and the famous or the strong and mighty but also of the poor and the wretched and the weak and the vulnerable.

Obiano’s direct personal involvements in the rescue of accident victims as witnessed in Upper Iweka, opposite Army Barracks last year and his award of scholarships to the three children of Ikechukwu Odinigwe who was crushed to death along with his wife and first son by a truck driver in Awka last August, all bear testimony to his being the governor of the weak and the vulnerable. So does his prompt clearance of 8-year old N1.9bn arrears of salaries owed Water Corporation staff as well as the N950m arrears of pensions and gratuities owed local government workers in the state.

Indeed, long before he became the governor of Anambra State, anyone who came in close contact with Willie Obiano never failed to leave with one impression – that he is a happy man. In almost everything he does, Obiano never misses the chance to connect with the people; to understand their pains and lend a timely hand. Edith Wharton, Pulitzer-winning American novelist once said that “there are two ways of spreading light: to be the candle or the mirror that reflects it.” It is indeed refreshing to see how, over the years Chief Willie Obiano has wittingly or unwittingly become both the candle and the mirror that reflects it.