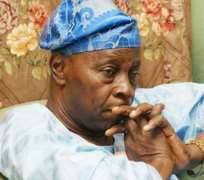 The kidnap of former presidential candidate and traditional ruler of Ilu Abo, Chief Olu Falae this morning has added a frightening dimension to the state of insecurity in Nigeria.

The Afenifere chieftain, according to eyewitness reports related to the family,was kidnapped on his farm in Ilu Abo by some Hausa-Fulani men who injured his farmhand who was forced to lead them to where he was.He was taken to an unknown destination from where the abductors have been speaking with the family demanding outrageous ransom if they wanted him to return alive.

The kidnap of Chief Falae is coming on the heels of recent abductions of Vanguard columnist,Ms Donu Kogbara and wife of Deputy Managing Director of The Sun Newspapers,Mr Steve Nwosu.

As kidnappers are invading the South,Boko Haram continues the festival of bloodshed in the North.

These are clearly intolerable and the security forces must rise to the occasion by taking concrete steps to combat the mindless lawlessness going on across the country.

The first responsibility of every responsible government is to secure the lives and property of citizens .

We demand the immediate release of Chief Falae and call on the security agencies to track his abductors swiftly .