Biology Is Destiny: The Role Of Women In Promoting Peace And Development In The Community 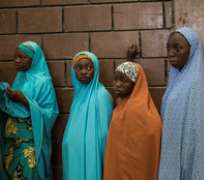 "It is true that there are no limits to masculine egotism in ordinary life. In order to change the conditions of life we must learn to see them through the eye of a woman." -- Leon Trotsky

Women's participation in peace processes is not optional it is a requirement in other for a peaceful community and better development.

Poverty, vulnerability and virulent conflicts have been the bane of communities in Nigeria for several decades. Yet, while it has been proven that women are more peaceful than men, these champions of peaceful co-existence are barely given the opportunity to be part of conflict resolution and peace building. For whatever reasons or mainly because of their biological differences, women are better peacemakers than men. One can thus say that to some degree, "Biology is Destiny".

A young lady passionately told her life story about the impact her mother has made in her life. Her story:

I was raised in a family where my mother told me “never believe that you are less than any other person, and especially if it is a man”. I suppose her words made great impact in my life and the truth is that I have never felt either discriminated or less than anybody else. I believe my mother was not the only one to teach her daughters to be free and be an independent woman who believe in themselves. I suppose many mothers and women in the world need to say same words to their daughters as mine did.

But in addition to her mother imbibing that sense of assertiveness, the young lady also learnt off her mother. Her mother is known for upholding the peace process in her community, and the daughter followed in her footsteps thus helping in the development of the community.

What this story immediately makes evident is the fact that the first role of women in the promotion of peace in our communities, is to raise more peace builders through their actions. Not only should the women raise female peace builders, but by virtue of their position in the lives of all their children, they are well placed to also raise male peace builders. That will create for us communities that are conflict-free.

Yet it is not always easy to have conflict-free societies. In the event of conflicts what roles then would women play?

It is important that in analysing issues in conflict or post-conflict areas attention should be paid to how latent, current and open conflicts or post-conflicts in a society affect the chances of development. No form of development can ever take place when there is conflict. It is also important to pay attention to how conflicts affect the two genders differently. A gender-aware conflict analysis looks at how a conflict affects the lives and relations between women and men in specific areas. Gender-aware analysis helps us understand that the vulnerability of women in conflict or post-conflict communities derives specifically from difference in biological configurations, and the care-giving responsibility of women. The woman's biology makes her vulnerable to sexual abuses and other forms of violence, and her care-giving roles place on her the huge burden of taking care of numerous dependents-- survivors of violent conflicts.

As the one who suffers the most during and after conflicts, the woman thus deserves the first seat in any discussion of conflict resolution and peace building.

Thus, the woman's second role then in peace promotion becomes that of the chief arbiter during disputes. The emotional constitution of the woman makes her the best positioned to calmly discuss disputes and seek a peaceful resolution. Men, as we know, are more hot headed, and emotionally unstable.

The woman's third role in the peace building process is that of promotion. The woman naturally wants peace, so before the conflicts even arise, she is better placed to constantly sensitize the community on the profits of peace. One of such profits is the realization of a better developed society. The second is the prevention of the violation of both men and women.

Biology is destiny, we said earlier, and what is evident from what we have so far discussed is the fact that the destiny of women is to be peace builders and champions of all round development. That is the destiny of women for "they are the ROCK upon which a better and peaceful society can be built". No other gender can do it better!