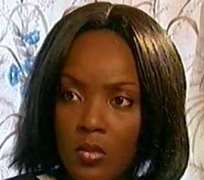 THE maiden edition of the Gulder Ultimate Search Celebrity Showdown is beginning to gather momentum and the contestants are battling to adapt to the hostile terrain while plotting strategies in their quests to emerge as the overall winner.

Genevieve Nnaji, the anchor person and task master in the ongoing show, has shown that in spite of her cool looks, she can also be tough and very affirmative when the occasion arises.

The first episode saw Muma Gee showing some domineering traits which her fellow celebrities especially the ladies lashed out at. She had a scuffle with Princess, Funke Akindele and Chioma Chukwuka.

The celebrities had fun finding the part of the jungle they would be camping and got even more lightened when they received their camping bags and tents as well as food.

Chioma Chukwuka, in the most motherly way, spearheaded the cooking and when the meal was ready, the celebrities sat down to do justice to their first meal in camp (boiled yam and palm oil).

Genevieve on her part did her best not to be cowed by the celebrity cast as she effectively took charge and read the riot act to her fellow celebrities participating in the show.

Her first words to the celebrities were very instructive and direct: “Shed yourselves of your old lives and embrace the exciting new life to be experienced here in the jungle.” She warned them not to “trust no one, but even at that, you will still need to trust someone here because, after all, you'll in the long run need someone to lean on.”

Not even the presence of Bob-Manuel Udokwu, the host of the regular Gulder Ultimate Search series, could intimidate her. Her direct question to Bob-Manuel could be said to make him understand that she was really in charge.

“Bob, how do you feel standing where you are? How does it feel on the other side?” she asked even as the question instantly elicited general laughter from other participants. But Bob, not wanting to go down so easily, promptly responded: “Confused, but there are two sides to a coin.”

Sounding tough, and perhaps determined to let her fellow celebrities know that the game was not exactly about deep-throated laughter, Genevieve's voice rang out sharply again, instructing and alerting them, “Soon, you'll be embarking on a journey. You must realise this journey is for those who possess the right qualities. You have to be strong and smart enough to survive. Celebrities, leave your luggage here and get prepared.”

It was, however, not all about talking and acting tough. When the celebrities were going through a tense moment during one of their tasks for the day, Genevieve showed that she could also be nice as she came to their rescue.

Thereafter she ordered all the contestants back to the seashore for another round of activity, following which she teased them that she “might” decide or not to make their lives a bit more comfortable. The comfortable life Genevieve promised was to, however, come in form of another task involving the need for them to move round some stacks of discs into some holes.

She warned that “for no reason must the big discs be on the small discs.” Being in the lighter mood, she jokingly alluded, “it's like putting big Princess on Daddy Showkey.”

If the popular saying in Igbo language that “the morning decides how a day will be” is to be applied here, then Genevieve may have proved many people wrong that she can really talk and act tough, irrespective of the situation, place and circumstance.

And in the spirit of slugging it out for the ultimate prize for the first ever Gulder Ultimate Search Celebrity Showdown, the contestants engaged each other in a war of words to show their level of confidence and preparedness at winning the coveted prize as they have come to discover that life in the jungle is another kettle of fish: full of challenges, endurance and determination.

The Gulder Ultimate Search Celebrity Showdown, he added, would keep viewers in Nigeria and around the world glued to their TV sets for the 11 weeks. “The Gulder Ultimate Search Celebrity Showdown is being packaged to change the face of reality television show in Nigeria. I want to assure Nigerian TV viewers that there will not be a dull moment for the duration of the programme as they will always have something to look up to every weekend,” he said.

The 10 celebrities contesting to emerge as the ultimate celebrity in the maiden edition of the Gulder Ultimate Search Celebrity Showdown include: Princess, Emeka Ike, Muma Gee, Funke Akindele, Daddy Showkey, Chioma Chukwurah, Abass Akande Obesere, Weird MC, Dare Art Alade and Bob-Manuel Udokwu, while delectable diva, Genevieve Nnaji, is the anchor person.
The programme is being aired every Sunday on NTA, AIT, STV, Africa Magic and Soundcity both on DSTV.