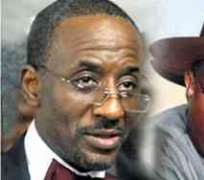 the Governor, Central Bank of Nigeria, Mr. Lamido Sanusi, and the Minister of Finance, Dr. Olusegun Aganga, have been named as members of a special committee to tackle the challenges in the nation's power sector.

Also on the committee, which constitution was announced on Thursday by the Minister of State for Power, Mr. Nuhu Wya, are the Director-General of the Bureau of Public Procurement, Mr. Emeka Eze, and representatives of the ministries of Petroleum and Water Resources.

The committee, headed by Acting President, Goodluck Jonathan, and with Wya as vice-chairman, also has experts from the power sector as members.

Wya did not give the names of the private sector experts but he explained that with the constitution of the committee, the Federal Government had begun to work in an 'emergency manner' to solve the problems in the power sector.

He was, however, quick to point out that 'emergency manner' did not mean a declaration of state of emergency in the power sector, which ailing President Umaru Yar'Adua had promised Nigerians during his electioneering campaign in 2007.

Wya, who also declined to make any promise on when power generation would hit 6,000 Megawatts, assured Nigerians that there would be remarkable improvement in electricity supply in the shortest possible time.

Speaking in Abuja after assuming office, the minister explained that the concept behind the special committee was to create a one-stop shop that would quickly improve the delivery of electricity to Nigerians without any hitch.

He also said that the process of generating and delivering electricity involved several stakeholders.

According to him, Jonathan has a deep passion for the power sector because it holds the key to the country's development.

He said, 'The special committee includes the CBN, which will unravel the issue of letters of credit and the issue of securitisation by ensuring that whoever is giving us power has some kind of security and other issues, which militate against the clearing of our goods from the ports.

'It also includes the minister of finance and he will fast track whatever we need in terms of budgetary needs and address any budgetary challenge we may have, comprehensively and timely.

'There is no declaration of state of emergency, but we are working in an emergency manner. We are getting all the stakeholders to participate in this committee because power is a chain of many stakeholders, from gas to generation to transmission and to distribution.'

He said the immediate objective of the committee would be to improve power supply, get sufficient gas, reinforce transmission and distribution networks and ensure that whatever was on the ground was improved upon and sustained.

Wya added, 'The oil companies are in-charge of gas and the Ministry of Water Resources is in-charge of water and they are going to be involved.

'And we have people from the private sector who are specialists in power that are coming to assist us.

'We want to ensure that all issues militating against prompt execution of power projects are concluded within the shortest possible time.'

The minister challenged power sector officials to embrace the reform in the sector.

He said, 'Engineers and technical people should not get afraid. All of us will find relevance within whatever comes out from the reform. Reform does not mean sacking people, it only means changing our way of doing things, doing things more efficiently.

'There should be proper accountability and rule of law in whatever we do. We must try to pass the message down to the junior ones, particularly the unions to embrace this new lease of life that the Acting President is giving to the power sector.'

Wya added that the committee would also work to create an enabling environment for present and new investors to operate.

According to the minister, the committee will in the medium term, explore other sources of energy.

'We have many dams and they have huge hydro electric potential. We are going to tap into those resources so that we can give Nigerians more electricity delivered to the point of consumption,' he said.