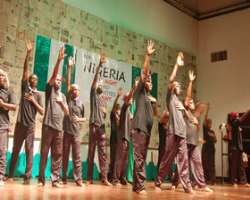 THIS year's commemoration of the International Theatre Day (ITD) by the National Association of Nigerian Theatre Arts Practitioners (NANTAP) was grand.

Marked by pomp and ceremony, the event of Saturday, March 27 which the art patron, Amb. Segun Olusola described as “a royal outing” had not just the physical presence of monarchs, Oba Olusanya Adegboyega Dosunmu and Oba Gbenga Sonuga, of Ogun state and their retinue of high chiefs but also an array of dignitaries.

The ITD celebration organised by the Lagos State Chapter of NANTAP in collaboration with the national executive, began on Wednesday, March 24, with a carnival held in advocacy for a cleaner environment. The carnival which involved theatre arts practitioners was flagged off from Maryland Bus stop, Lagos by Mr. Idowu Obasa, Chairman of Onigbongbo Local Government, Lagos and terminated at the National Arts Theatre, Iganumu, Lagos.

On Friday March 26, a commemorative seminar was held on the theme, Culture: Cultural Diversity and Climate Change as part of the ITD week activity. The Activities climaxed on Saturday, March 27 with dance and drama presentations as well as the decoration of HRH Oba Dosunmu of Owu Kingdom, Ogun state as the ITD Distinguished Personality of the Year among other NANTAP cultural ambassadors. Seven Cultural Ambassadors, recognised for their contributions to Nigerian cultural development were decorated. Among those decorated as Cultural Ambassadors were Prof. Bayo Oduneye, a theatre scholar and proficient theatre director, Prof. Ojo Rasaki, a scholar, dramatist, theatre director and actor; Mrs. Sofowote, a singer, teacher and role model of many young artistes and Alhaji Balogun, a politician and social scientist. Other recipients of the honour were Kemi Koyejo, an actress and film producer, Hasib Moukarim, a business man and culture promoter, and Hajia Bola Muse, a philanthropist and humanitarian worker.

A command performance of Arole Oodua (Baba Ni), a play written by Oba Dosunmu was also part of the day. Directed by Sanya Gold, Arole Oodua, is an epic drama based on the legend of Oodua the progenitor of the Yoruba race and his challenges with getting a child to succeed him as king. Presented with rich colourful costumes depicting the setting of the play, the performances had the audience glued to their sits.

The last day's performances which drew ovation from the audience included a special rendition of the national anthem by Mawuyon Ogun, a breathtaking musical presentation by the group of youngsters, Adunni Nefertiti, a spectacular dance presentation by the Guild of the Nigerian Dancers (GOND), Lagos State Chapter, and finally, the staging of Arole Oodua. There were equally two impromptu dance presentations which marked a remarkable end of the show. The first dance was from the ITD Distinguished Personality of the Year award recipient, Oba Dosunmu, a professional broadcaster and producer of the television drama, The Village Headmaster. During the curtain call of his play he joined the actors on stage in a dance that got the audience in awe.

The other dance performance was from the Member of the Order of the British Empire (MBE) title holder, Badejo, an internationally renowned choreographer and dancer. Badejo literally converted the orchestra pit into a stage as he did a special dance for and in honour of Oba Dosunmu.

In his note, the Chairman NANTAP Lagos State, Mr. Mufu Onifade described this year's edition of ITD as another moment of fulfilling of the body's artistic ritual – observation of the UNESCO-declared ITD. He said his body is committed to the yearly celebration, and making it a gathering of theatre practitioners that borrows from a global dictate, adding that they mark the event as a special occasion to recognise the achievement of Thespians who deserve to be congratulated for carrying on with the profession in spite of attendant challenges.

Onifade hinted that his executive council in concert with the ITD Planning Committee wanted to celebrate the event in a big way by spreading their activities across cultural venues in Lagos, but sadly, the reality of the economic meltdown soon dawned on them. “Our inspiration and aspiration had actually beclouded our perception of this global economic crisis. Thus, it was with great shock and pain that we were compelled to swallow the bitter pill of the most visible no-fund song playing lullaby on everyone's lips.

“Theatre is a very disciplined profession; second only to the Military. So are the practitioners. That is why the parlance, 'the show must go on' holds sway in our hearts. Whether it rains cat and dog or shines storm and fire, the parlance comes in handy to urge us to forge ahead. And this informs our collective decision to honour this year's International Theatre Day. That the celebration is re-designed to span three days (24th, 26th and 27th of March) is a result of our doggedness and determination to play our cast-part in the global command performance of ITD.”

In line with the desire to mark the ITD in a very significant way, the first NANTAP- Lagos Exhibition of Memorabilia, a new idea was planned to be part of the celebration but the absence of fund made the show not hold. Onifade however informed that the exhibition will soon return as an independent project. “The executive council's pledge on this is sacred and we will ensure its reality,” he said.
Chief Olusola commended NANTAP for organising the event.