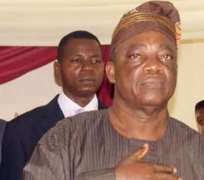 The Ondo State deputy governor, Alhaji Alli Olanusi, has been impeached by members of the state House of Assembly this morning.

Olatunji Adeniyan, Chairman of the seven-man panel constituted by the Chief Judge of the State, Justice Olasehinde Kumuyi found Olanusi guilty on allegations of misconduct levelled against him.

It would be recalled that Ondo lawmakers had began impeachment proceedings against the deputy governor.

Olanusi dumped the Peoples Democratic Party for the All Progressives Congress days before the March 28 presidential election. His switch was believed to be one of the reasons PDP lost to APC in the state.

Olanusi was however impeached for 'gross misconduct, corruption and truancy contrary to the law of the land', today directed the Clerk of the Assembly to serve Olanusi impeachment notice.

At a session presided over by Speaker, Jumoke Akindele, Majority Leader, Ifedayo Akinsoyinu, said their action was based on Section 188 (2) of the 1999 Constitution (As amended).

Seven allegations were levelled against Olanusi. Here are the particulars of the charge as read by Akinsoyinu:

'The deputy governor also disparaged the office of the governor by alleging that the governor carted away ballot boxes, instigated the killing of people of the state, disrespected the judiciary, worked against the interest of the President and he bribed the electorate'.

Olanusi was also accused of engaging in absenteesim and truancy 'by regularly absenting himself from office, place of work and other official engagements without lawful excuse or authorisation but generally acting in a manner inconsistent with the dictates and expectations of the high office of the deputy governor of a state, thus, undermining the governance process, an act which amount to gross misconduct under the constitution.

'Deliberately, he allowed his security aides to shoot indiscriminately peaceful protesters along Fiwasaye/Oba Adesida Road in Akure, thus creating panic, breakdown of law and order, and general sense of insecurity within the state under the pretence that the said protesters disrupted his convoy, an act unbecoming of the holder of the office of the deputy governor.

'The deputy governor also collected various sums of money including N8.1 million, N8.9 million, N10.8 million and N11.3 million for the purpose of traveling for medical purposes and refused to use the fund for the purpose meant for.

'The deputy governor engaged in political misconduct by working at cross purposes with the governor and, thereby, wants to destabilise the government by openly canvassing the impeachment of the governor'.

The Speaker, Jumoke Akindele, presided at the session.