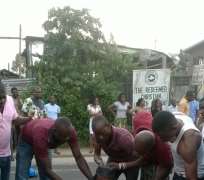 At about 6:01pm on Friday 17th April 2015, a serious but shocking accident occured between a bike man (a policeman) and a 504 motor car in a collision in Orok Orok by Uwanse lane, Calabar south, Cross River State.

Brainnews NG gathered that the bike man was seriously injured, but the driver of the 504 car went without an injury.

A good samaritan (a woman) with a white Toyota camry car offered to take the survivor (the bike man) to a nearby hospital.

We pray for his quick recovery wherever he is taken to.