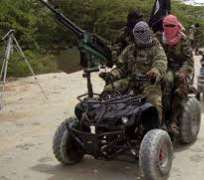 Adamawa state would have been turned into a mourning ground ,for the first time a high calibre bombs which was suspected to might have been planted by members of Boko Harams was

calibre Bombs at Song Local Government which is a few minutes drive to the capital city of Jimeta with which terrorist wanted to launch attack on the state.

The commissioner of police in Adamawa state, Gabriel Adaji unravelled the purported evil plan of the insurgents in a Press Conference in Yola yesterday said the bombs

work.
The disclosure by the commissioner of police came barely six days

after six suspected suicide bombers were apprehended by soldiers in

Yola, the state capital.
“Something that would have caused a hell of sorrows to the state was

averted. One of the bombs is capable of bringing down a 10 storey

He said that had the terrorists succeeded in their attempt, the state

strategic structures including the more than one kilometer River Benue

Bridge linking the state capital with northern parts of the state.

squad of the state police command adding that with the feat, a major

of destroying a ten storey building.
He noted that the smallest among the bombs can completely destroy

structures within 200 meter radius and on the verge of being

transported to various parts of the state capital before they were

discovered.
He said the discovery of the bombs followed a tip off by an informant

who disclosed the activities of the terrorists following which the

arrest has been made in connection to the incident.

The commissioner similarly thanked the media for their assistance to

the security agencies adding that it was through their proactive

reportage that the police started swinging into action leading to the

confiscation of the bombs.
With much assurance by the commissioner of police of protecting live and property and reminding the public that police are always on top of the security in

activities advising residents not to hesitate in reporting suspicious