What Shell's Settlement for Environmental Pollution in Ogoni Means 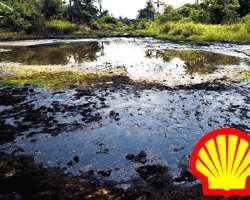 The recent settlement by $hell Petroleum Development Company of $83.5 million to the Ogoni community of Bodo, as out-of-court compensation in the United Kingdom, for two oil spills caused by company's negligence in 2008, is a sign of hope. It is a welcome development in the Ogoni struggle for environmental and economic justice.

Although the money may be small compared to what the company and its likes pay in European countries and United States of America for lost sources of livelihood and development, it opens the stage for accountability, better remediation measures and possible positive community relations. This settlement has clean-up package. That is, $hell will clean up its usual mess of pollution.

What this should mean to the Ogoni people and struggle is simple: that the people must unite to pursue legal actions in the United Kingdom and Netherlands-$hell's home countries, for the large scale pollution as captured in the United Nations Environmental Program's (UNEP) report released in 2011. They should arm themselves with the United Nations Environmental Program's (UNEP) report, other documents and evidence to seek internationally acceptable clean-up measures and adequate compensation.

This compensation announced last week also means, $hell is guilty as charged by Ogoni hence responsibility accepted. It means Ogonis, Ken Saro-Wiwa who carefully documented decades of oil spills caused by $hell and other companies, including the Nigerian National Petroleum Corporation (NNPC) owned and operated by the Nigerian Government were right about the allegations, complaints made against $hell and other polluters. They are therefore vindicated.

It means invariably that, there is hope for the Ogoni people who have been seeking justice and by so doing harassed, intimidated and communities destroyed by Nigeria soldiers paid by $hell. They were wrongfully arrested, jailed and killed. Although corporate accountability is common in Europe and America, other parts of the world despite the power and influence wield by these corporations, some of which dictate laws, public policies in their interest. These almighty corporations of European stock in particular which can't be touched or successfully investigated and indicted, tried and convicted in Africa, Nigeria especially, are now opened for investigation and litigation in their home country.

In Ogoni, as commonly known to the people, oil spills which occurred since 1970 are still there not cleaned, though the company's books would claim they have been cleaned. Ogoni has witnessed spills on weekly or monthly basis since the early 1970s. This has been mostly so to this day despite the fact that oil operations was stopped by Ogonis, when the companies and federal government refused to respect them and attend to their just demands of environmental justice and self determination in the form of political autonomy. This autonomy will allow the people control their affairs like other groups in the country, and particular attention paid to environmental control to guide against incessant pollution and degradation.

In addition, it is not a secret that the summary reason Saro-Wiwa was targeted and killed alongside other Ogonis was his revelation of Ogoni pollution and degradation, and campaign, which took international dimension alongside stopping the Ogoni oil from flowing to the government and companies. This made $hell and the Nigerian government, other conspirators uncomfortable and unhappy. The company's image was dented hence the many questions, which continue to this day. The good news though is, with agreement and settlement of this nature answers have began coming in about the company's exploitation in Ogoni and other parts of Niger delta of Nigeria.

What Ogonis need now is to unite as one strong and indivisible people under MOSOP or any other front deemed credible and determined not to compromise against the wishes and interest of the people. As this out-of-court settlement shows, and like the first Ogoni human rights case against Shell in America, which was also settled out of court for $15.5 million dollars in 2009. Ogonis will triumph if in one accord, if there is unity of purpose and they are open to collaborating with groups around the world willing to help. Division in MOSOP/Ogoni as it is today is not the answer, so not good for the struggle and people in any manner. Any house divided against itself doesn't stand the test of time. $hell and the Nigerian Government, politicians have capitalized on this division to the detriment of the people.

$hell can not run from its crimes in Ogoni despite attempts to blame the many spills, pollution on sabotage, which is new to the oil industry. Interestingly, fingers have also been pointed at the company and government for their roles in some of the alleged sabotage. Evidence will show as did in the Bodo case irrespective of $hell's sinister actions of cover-up and blame games that Ogoni oil pollution and degradation is real. That these spills and pollution are caused primarily by company equipment failure and negligence, which the government/politicians help to cover as partners in crimes. This inglorious partnership tells why Ogonis have to sue the company in United Kingdom and America to get a semblance of justice.