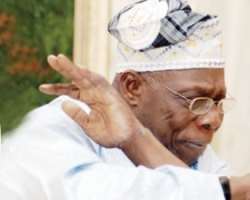 A former president, Chief Olusegun Obasanjo, has said he can sacrifice his life in the interest of Nigeria. However, he said he would not do the same for any political party.

He said this on Thursday during a visit to his Hilltop residence in Abeokuta by the presidential candidate of the National Conscience Party, Dr. Martins Onovo.

He said since he left office his pre-occupation had been the promotion of the country's interest, adding that it would be foolish for anyone to say Nigeria did not belong to anybody.

He frowned on the situation where everyone would keep quiet and watch things degenerate in the country.

While commending the late legal icon, Chief Gani Fawehinmi, the founder of the NCP, he said though some people might not agree with his brand of activism, he was a veritable voice of conscience.

'So if you, as the flag bearer of the party, believed that you should follow on his footsteps of integrity and genuine critical and committed analysis and criticism of the situation in the country, I think nobody will fault you.'

He advised the party to accept whatever was the outcome of the election, if the election was free, fair and uninterrupted. He said that people should not necessarily be in government before they could contribute to the nation's development.

He said, 'In this part of the world, we have a saying that if people sleep and they put their heads on the same pillow, they are in danger. That means there should be some people that should be critically looking and watching and also able to speak up. They should speak up, no matter what others may say.

'Let me make my own position clear, I am a card carrying member of the PDP, because that is the party on which platform I became the President of this country.

'If what you're trying to do is in the best interest of Nigeria and Nigerians accept and vote for you, who I am I not to accept you as President of Nigeria, I will. But in this your campaign, try to inform, woo and to convince the electorates but whatever may be the outcome of the election after you have done all that, once the election is free and fair and undisturbed, uninterrupted, then you have to accept the verdict of the people.'

Onovo said his government, if voted, would continue with the developmental initiative of the former President.

He said, 'Our programme is designed to lead to the abolition of poverty through full employment, improve health care and electricity supply and energy which are very critical to industrial development.

'We are very aware that you did very few critical things in government when you were there and some of those we wish to continue when we get to office, particularly the anti-corruption efforts, Economic and Financial Crimes Commission, Independent Corrupt Practices and other related offences Commission, we intend to continue.

'We intend, when we get elected with your guidance to your effectiveness, to check the loss in national revenue so that we have funds to carry out the developmental programmes we've promised our people.' - Punch.