We don’t want to go to jail’ – Akpabio 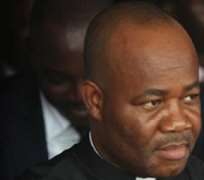 The Akwa Ibom State Governor, Mr. Godswill Akpabio,  has said that no Nigerian will like to go to jail without committing crime. Akpabio,  who is the Chairman of the Peoples Democratic Party Governorship Forum, said this at the PDP presidential campaign rally holding in Lagos.

He said that in the past many innocent Nigerians were jailed for offences they knew nothing about,  adding that Nigerians should therefore not vote for a party that is threatening to repeat the ugly past.

According to Akpabio, the alleged missing money from the treasury has been shared by all the governors.

He said the money which was about 55bn was shared because of the needs of the people in their states.