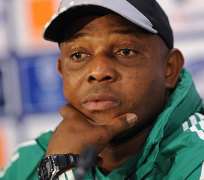 Speculations linking out-of-contract Super Eagles coach, Stephen Keshi with the vacant position of head coach of the  Equatorial Guinea national team have been put to rest with plans by that country's football association to appoint Esteban Becker to replace Andoni Goikoetxea.

Equatorial Guinea have opted not to renew coach Goikoetxea's contract, which expired on 31 December. The country's football association (FEGUIFUT) claims Goikoetxea breached his contract by not travelling to Portugal with the team on 16 December.

As a result Goikoetxea was sacked, a decision sanctioned by new FEGUIFUT president Andres Jorge Mbomio. Following the sack of the former handler, the 2013 Afcon-winning Keshi was widely speculated as his possible replacement. With the latest development from that country, Keshi whose place in Nigeria is still shrouded in uncertainty remains in limbo.

Equatorial Guinea have just over two weeks with the team before they kick off the Nations Cup against Congo on 17 January.

Argentine Becker, 50, was previously in charge of Equatorial Guinea's women's team, who he led to the 2012 Nations Cup title.

As well as facing Congo, Becker would lead his new team out against Burkina Faso and Gabon in Group A. Equatorial Guinea stepped in as last-minute replacements for original hosts Morocco, who failed in their plea to the Confederation of African Football to postpone the tournament because of fears over the potential spread of the deadly Ebola virus.

As a result Equatorial Guinea were handed Morocco's place at the finals, despite having been eliminated during qualifying after they were penalised for fielding an ineligible player. Agency report