Poverty And Crisis In Africa 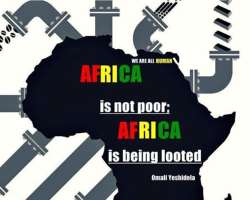 Who benefits from the narratives of portraying more than a billion people as poverty stricken and an entire continent as nothing more than wastelands for numerous crises? These are questions that I have often pondered especially with my knowledge of the enormous wealth in most African countries and my exposure to the western media narratives.

Last week my attention was drawn to the questions and answers from an article issued to fourth graders titled “Crisis in Africa.” Upon reviewing the contentsit read like a how low you can go diatribe on the stereotype, prejudice, and bias representations of the African continent.

The questions and answers of the Crisis in Africa article covered themes that the text and teacher wanted the 4th graders to gain mastery on, such as how the G8 nations are going to save Africa. My son and his peers who are in the upper echelon of their English reading class were getting information about the lack of education in Africa, the poverty in Africa, and the potential salvation schemes of the G8 countries. Fortunately, my child had travelled to Nigeria and knew that his parents were raised in West Africa with varying life experiences that weren't solely based on the poverty paradigm and crisis presentations of liberal and conservative westerners.

Nonetheless, I fired up an email to the head administrator of the school to demand some explanations. How could young malleable children be availed with such one sided narratives about a geographical space that is bigger than the combination of America and Western Europe? Why did the article's questions and answers concentrate on issues of poverty, diseases, starvation, malnutrition, and war? What is the justification of a query like- “African children often don't go to school because?” Why is there the underreporting and neglect of the different nuances that are prevalent in each region of that massive continent? For example, suicide clusters in Northern Virginia and Alaska don't indicate endemic suicides in North America which includes Canada, Mexico, and some Caribbean nations.

After examining the listed hypotheses and testing them against historical and contemporary realities it was not hard to identify the major benefactors of the status quo. My son's school did not manufacture these information which have been internalized by humanity and have gotten to the point of self-fulfilling prophecies for African people. The poverty and crisis propaganda about Africa serves the incestuous and imperial relationship between European and African elites. For example, France is able to preach about liberté and égalitéwhile supporting dictators like Mr. Blaise Compaore of Burkina Faso and Mr. Paul Biya of Cameroun. Switzerland on the other hand is notorious for acting as coconspirators of these multi-millionaire gangsters that steal from African nations and deposit billions in European financial banking institutions like the original European imperialist.

On this side of the Atlantic, Europeans in Washington speak of freedom and democracy while supplying rulers in Ethiopia, Ugandan, and Djibouti with weapons to derail the interest of their masses. United States Agency for International Development (USAID) and the European Union (EU) want to utilize Non-Governmental Organizations (NGOs) to spread the message of poverty and crisis on the continent whereas facilitating the exploits of western companies. Some folks are going with the flow and joining the winning side. How can Africa be simultaneously poor with business profit margins that are off the chain?European oil corporations like Royal Dutch Shell, ExxonMobil, and British Petroleum which are ranked as the riches worldwide corporations have been exploiting Africa for centuries.

However, Europeans are not the only ones talking out of both sides of their mouths that think the rest of us are stupid and/or blind. African rulers and their cohorts are major agents in this wahala and global conspiracy. For example, it is alleged by some publicationsthat the Democratic Republic of Congo which is now the second biggest African country, is also the poorest in the world. ButCongo is one of the largest producers of coltan which is in many electronic devices including cellphones. The African rulers in Congo, Rwanda, Uganda, Burundi, and South Africa have generated billions from the Congo basin through dubious refining and extracting activities. Congolese women have become synonymous as the collateral damage of the various schemes to steal resources.

Liberiawhich is also listed as one of the poorest countries in the world has some thriving mining and forestry industries. The former and present rulers of Liberia are mostly millionaires and Mr. Charles Taylor gave out diamonds to his lovers. Liberia is so poor that Firestone Tire and Rubber Company has generated billions by extracting rubber from Liberian plantations. But the saga continues because Africa remains under assault from within and without. For example, African rulers in Guinea, Liberia, and Sierra Leone signed off on the arrival of Corgenix Medical Corporation and Professor Robert Garry of Tulane University for the manor river project. In 2007, on the guise of assisting those countries,bioterrorism research began at the manor union andnow we have the first recorded Ebola outbreaks in West Africa.