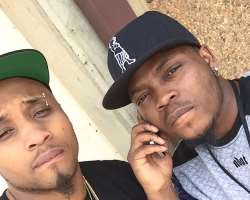 The trend at which Nigerian entertainers are beginning to beef each other is becoming alarming as fans begin to wonder whom to support.

All talking about Wizkid, is he that arrogant? Recently, HKN singer, B-Red, who is in South Africa, striked a pose wave making rapper, Olamide and shared the picture with a caption, “Me and @kingbaddo in SA......baddo real nigga.....not like some people lol”

Although the singer never mentioned anybody's name, but it became obvious when fans helped to reveal who he was making reference to and it became war while the singer keeps watching without any response.

lifeofshabzy: Wizzy na senior man naw...how du u expect him to roll with low niqqr like ya!?

Interestingly, Olamide who suddenly decided to go through the comment box of B-Red, was speechless at the caption, could not say anything than to call the singer like a father calling his son.