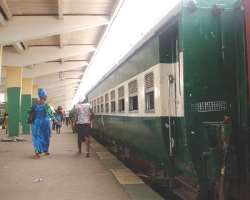 President  Goodluck Jonathan said all  state capitals would be linked with rail transportation to boost the nation's economy.

Jonathan stated this in London at the 17th meeting of the Honorary International Investment Council (HIIC) with the theme: Rail Transportation.

He said that with such nationwide rail coverage, roads and highways would be better maintained, adding 'if we do not link state capitals by rail, our roads will not last.''

On upgrade and expansion of the nation's  public infrastructure,  the President said, 'we cannot mould the economy of the country without good infrastructure.

'Quite a number of companies construct roads to their sites. This is not supposed to be so. We are committed to addressing this, we have been working hard and we have improved our road networks significantly.''

He expressed optimism that government will resurface all federal road networks across the country within the next three years.


'We intend to initiate some new ones that are very critical especially to link up Port Harcourt city and Bonny the major gas exporting terminal of our country'', Jonathan said.

The President also informed the HIIC members of government's commitment to securing the nation's air space and improving the quality of airport terminal buildings.

Jonathan assured that government was determined to end security challenge facing the country.

'We are improving in the area of security, for about a week now, no new story of Boko Haram holding territories.

'Instead, we are reducing them by the day, before now, many local government areas  in Borno State  were  taken by Boko Haram, but now it has reduced.

'We are working to put an end to the holding of territories by Boko Haram'', he stressed.

Baroness Lynda Chalker, HIIC Coordinator, said the council had focused on various sectors of the economy since inception.

'But this 17th meeting will focus on rail transportation given its critical role to the economy.''

'It is not in anybody's interest to run Nigeria down'', she said.

Chalker lauded the nation's response in tackling the Ebola disease and paid tribute to the late Dr Stella Adadavoh.

She said her action stopped what would have been a terrible devastation for Nigeria, 'but unfortunately, she died.''

The Ministers of Transportation, Power, Works, Aviation Finance, National Planning, Trade and Investment as well as Defence made presentations.

The HIIC, made up of prominent investors around the world, advises governments on economic development.