Insurgency and the 2015 elections in the Northeast - Daily Independent 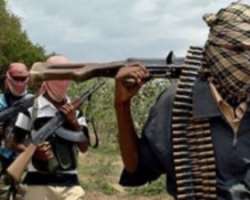 The insurgency in the northeast of Nigeria and the inability of the Nigerian military to positively check the menace of the Islamist fundamentalism leave much to be desired and  make Nigerians feel humbled and ashamed as long as the schoolgirls (Chibok girls) remain in captivity. Beyond that, though, is the continuous loss of lives, property and part of sovereign territory to the insurgents, besides the fear that the 2015 elections may not hold in this part of the country, thereby disenfranchising the citizens in this territory and making the election inconclusive, ab initio.

Perhaps informed by the palpable fear of a bleak election, which is just three months away, the Senator George Sekibo-led Senate Committee on Defence invited the Chief of Army Staff, Lt General Kenneth Minimah, for a briefing on the security situation on Thursday, November 13, 2014. True to reports, the army chief did admit the loss of some territories to the insurgents, promising that the military will do everything possible to reclaim them. This is quite unfortunate. Only on October 17, the Chief of Defence Staff, Air Chief Marshal Alex Badeh, announced a ceasefire with the insurgent Boko Haram and a deal to release the Chibok girls, claiming the deal was brokered by the Chadian President, Idriss Derby.

The failure of the so-called ceasefire and the video released by Abubakar Shekau, - the insurgent leader who the military claimed to have killed several times over - to Agence France-Press (AFP), debunking any ceasefire and revealing that the schoolgirls have been converted to Islam and married off since their kidnap six months ago only bring to question, if the Nigerian military is actually capable of defending our territorial integrity, which is their constitutionally assigned primary responsibility. Now it is almost impossible for any one to believe the military or, indeed, the Federal administration on issues of this insurgency.

Before the recent recapture of Mubi from Boko Haram, with the aid of local hunters - who as it is are the heroes of that feat - the insurgent group is reported to be in control of about 1820 sq km of Nigeria's territory in the three troubled states of Adamawa, Borno and Yobe. Yet these states have been under a state-of-emergency for about two years with full military presence. Ironically, the Defence Chief, Badeh, is from the troubled spot, and has lost his hometown to the insurgents. What a paradox could that be, and what exactly is the military doing to arrest the insurgency?

Now, with the situation on ground, this Newspaper strongly doubts - unless proven otherwise - the possibility of the 2015 election holding in these three states of the northeast. Already, the Independent National Electoral Commission (INEC) has raised fears of its inability to conduct elections in the zone, should the threat of insecurity persist because the commission cannot afford to risk the lives of its personnel and the adhoc staff. Added to that is the fact that the insurgents may readily make the conduct of the election a prime target of attack. With the obvious failure of the military in the war against Boko Haram, it makes better sense of reasoning, should the insurgency continue, not to conduct election in the three states. But that, as it were, raises a very big constitutional crisis that could rubbish the whole election.

That is why we agree with Senator Sekibo that the Army needs to win the war on the bloodthirsty Boko Haram, restore its integrity and the faith of Nigerians in its ability to defend the country; just as well as ensuring that peace returns to Nigeria and that come 2015, the elections will be conducted in every part of Nigeria devoid of any fear of insurgency.