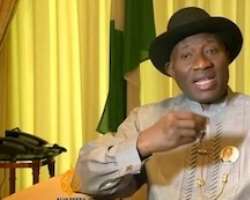 Nigeria's ambassador to Washington has blasted the United States for refusing to sell his country the weapons needed to deliver 'the killer punch' to defeat Boko Haram militants.

In a speech made public Tuesday, Ambassador Adebowale Adefuye also dismissed as 'rumours, hear-says and exaggerated accounts' allegations of human rights abuses by the Nigerian army in its crackdown on the Islamist extremists.

'The Nigerian leadership… are not satisfied with the scope, nature and content of the United States' support for us in our struggle against terrorists,' Adefuye told members of the Council on Foreign Relations on Monday.

His speech was posted Tuesday on the embassy website on the same day that President Goodluck Jonathan announced he would stand again for re-election, vowing to defeat Boko Haram.

'We find it difficult to understand how and why in spite of the US presence in Nigeria with their sophisticated military technology Boko Haram should be expanding and becoming more deadly,' Adefuye said.

A small team of US military and State Department advisors has been in Nigeria for months seeking to help track down some 200 schoolgirls kidnapped by Boko Haram in mid-April.

But on Jonathan's watch, Boko Haram violence and the military's response to it has killed more than 10,000 people in the past five years and left hundreds of thousands more homeless.

While condemning the attacks by Boko Haram, the US has repeatedly called for the Nigerian army to show restraint as it seeks to hunt down the militants and not give in to reprisals.

The ambassador however insisted the fault lay with Washington.

'The US government has up till today refused to grant Nigeria's request to purchase lethal equipment that would have brought down the terrorists within a short time,' he said.

'There is no use giving us the type of support that enables us to deliver light jabs to the terrorists when what we need to give them is the killer punch,' he said.

Washington's allegations of widespread human rights abuses by the Nigerian army 'cannot be substantiated by facts,' Adefuye said, adding 'half-truths' had been spread by Jonathan's rivals and human rights groups with an agenda.

'The terrorists threaten our corporate existence and territorial integrity,' the ambassador said, urging members of the Council on Foreign Relations to plead Nigeria's case with the US administration.

'A friend in need is a friend indeed. The true test of friendship is in the times of adversity.'