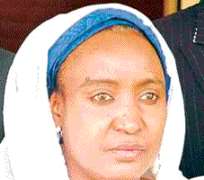 Turai
Loyalists of ailing President Umaru Yar'Adua are becoming desperate by the day and seem determined to stage-manage a public appearance for the former Katsina governor as a way of shoring up his fading influence and hold on power.

The group launched their fresh plot by flying the kite that the ailing leader would make a public appearance at Abuja central mosque last Friday. To lend credibility to the plot that has since broken into smithereens, the group reportedly drove the Presidential convoy around Abuja to create an impression that Yar'Adua has recovered and was the one in the convoy.

The appearance of the convoy with the insignia of the President was said to have created tension in the FCT.

Sunday Sun findings also show that as each of their plans fail, the group will launch a new one to continue to remind the nation that Jonathan is not yet a substantive President.

Indeed, palpable tension has enveloped Abuja ahead of Monday's plan by the Senate to start the screening the 33 ministers nominated by Acting President Goodluck Jonathan.

Sources said senators are now beautiful brides being wooed by elements desirous of one favour or the other from the upper chambers. Members of the kitchen cabinet of ailing president Umaru Yar'Adua are also said to be out to frustrate Jonathan by erecting roadblocks on his path to effective governance.

One of the methods being employed by Yar'Adua's men is to get the Senate to reject several candidates sent to them as members of the about to be reconstituted Federal Executive Council. That way the new cabinet would not be constituted as quickly as the Acting President wants.

' Those desperate men are doing everything to patch up the President and bring him out even if it is for a few days. That way they would tell Nigerians that Yar'Adua has returned and Jonathan should hand over to him. We would then be taken back to square one. Of course the poor man is as unfit as they come and can hardly stand on his feet but those who see him as a meal ticket and key to the corridors of power are going to deploy every trick in the book to destabilize the country.' Our source alerted.

Sources at the National Assembly also disclosed, ' the group has moved in money, I mean real money, in foreign currency to woo senators to reject some key nominees so as to slow down the Acting President.'

The source specifically said that two senators, one from Katsina and another from Kebbi, are distributing $100,000 each to senators to get them to reject the nominations of Dora Akunyili and Adetokunbo Kayode specifically.'

According to the source, the offence of Akunyili is her decision to break ranks with other former ministers by calling for the ouster of Yar'Adua, while Kayode's offence is his alleged closeness to Jonathan.

'The game plan is to ensure that Kayode does not scale through the senate screening so as to allow Mohammed Bello Adoke, another Senior Advocate of Nigeri, from Benue as the attorney General and minister of justice instead of Kayode.

'The plot of the pro-Yar'Adua elements and some Northern hawks is premised on the way Akunyili broke ranks with other ministers when she presented a memo that jolted the council, asking that Yar'Adua hand over to Jonathan while he recuperates',he added.

The source said, 'She caused a lot of problem for the Yar'Adua people the last time she was in the cabinet, so allowing her in that place now is very dangerous. She has to be stopped. Akunyili has demonstrated that she is more of an activist politician than an establishment person.'

The concern over Akunyili, a northern legislator said, is that 'they are afraid that Akunyili's passion for the people is a clog in the wheel of the own political prowess and future. It is true we have said that everyone can aspire to be President, but we all know the north is yet to have eight years and we will want it to go back to the North. But with a person like Akunyili and Kayode in the cabinet, you can't be sure of anything.'

Recently sacked Senator Joy Emordi is also not making things easy for Akunyili as she is said to be spreading rumours that the former information minister was behind her predicament at the court of Appeal though the duo are from different Senatorial zones.

The Court of Appeal sitting in Enugu had on Wednesday sacked Emordi from the upper chamber and replaced her with the candidate of the All Nigeria Peoples Party (ANPP) in Anambra state.

However, reliable presidential sources hinted that Jonathan is determined to do what is right.

'He does not talk much and though he has heard all the permutations, it is not likely he would take a decision against Akunyili.'