I Want To Remarry, But To A Man Who Doesn't Lie- Uche Ogbodo 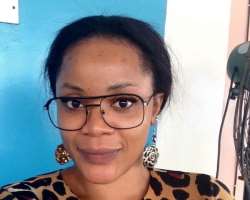 It is no longer news that the few months old marriage of fair-skinned Nollywood damsel, Uche Ogbodo, who has just returned from the United States after the delivery of her baby girl, has since crashed with lots of controversies surrounding the cause of the marriage failure.

It was reported that her marriage to ex-Nigerian footballer, Ato Ubby hit the rocks because he had a brain tumour, others accused the actress of marrying the hapless footballer only for money.

However, Uche is back and ready to tell her own side of the story about her marriage and who she wants as an ideal husband.

"My marriage was full of lies. I cannot tell you in detail what those lies were, if that's what you're trying to make me do but it was based on lies. It's a pity it didn't work out.

I didn't go into the marriage to crash it. I wanted a family; I wanted a loving home and a loving husband. That was why I went into it in the first place but as nature would have it, I didn't get any of those. I still thank God my head is intact. It's not about women. Like I always say, you cannot build a home on sinking sand. You need to build a home on a rock. What I mean is that a marriage built on deceit and lies is no marriage at all. If you want a solid marriage, it must be built on honesty and trustworthiness. If not, it's definitely going to crash. If it doesn't crash today, it will crash tomorrow, so the lies are my reasons."

She also denied the speculations that her estranged husband has brain tumor.

"He doesn't have brain tumor. He was sick at the time, he had issues but his sickness is not the reason why our marriage crashed. Money was not the issue either. I would definitely know about his health status before I would marry a man. I knew what I was going into, so how could I just leave a man because he had a brain tumor? It's funny.

He was sick, he was treated but it had nothing to do with the brain. He had surgery but it was not brain tumor, it was not cancer, he was just sick and I thank God that he's alive. I don't know why people just wake up and conclude things out of the blue; you don't know these people from Adam, you just read about people and then you go and comment rubbish. You write rubbish to tear people's lives apart even when you know nothing about their issues."

That notwithstanding, the now single mother one still plans to give marriage another shot anytime soon.

"I've left the door open. I'm not going to close the door of marriage because one marriage didn't work. The door is wide open. When I find someone that I'm going to be happy with but I wouldn't want another experience where my marriage crashes because once beaten twice shy. So I'm going to take my time now and dig deep.
I'm only going to keep praying to God to give me someone who wouldn't lie to me, someone that would be plain, very plain to me."