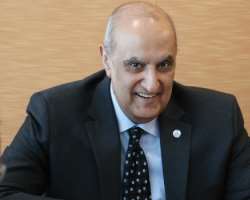 In 2012 the United Nations General Assembly created a mechanism to monitor commitments made by African countries and their partners to improve Africa's economic development. The Office of the Special Adviser on Africa (OSAA) is the secretariat for the mechanism, and works with other UN agencies to track progress on these commitments. In an interview with Africa Renewal's Kingsley Ighobor, Mr. Maged Abdelaziz, the secretary-general's special adviser on Africa, talked about what the UN hopes to accomplish with the monitoring mechanism. The following are excerpts.

AR: How would you assess the pace of Africa's economic development?
Abdelaziz: There is a lot of potential in Africa. Six of the 10 fastest-growing economies in the world are from the continent, a region with a lot of natural and human resources. But what is required is a transformative agenda, one that is now appearing in different documents that have been approved by the African Union. It will be crowned when Agenda 2063 [the AU's 50-year development plan] is adopted at the next AU summit in Equatorial Guinea. Many commitments and plans have been made. What we need now is to decide what will be the short- and medium-term objectives and what we can leave for future generations.

AR: The problem has never been a lack of ideas or frameworks or agendas or blueprints. The problem has always been implementation. What has changed this time around?
Abdelaziz: What I can say is that this transformative agenda is turning into concrete steps that can be implemented. This direction is towards industrialization, and that is very important. Inclusive growth, meaning that every person in Africa should benefit from its natural resources, should also benefit the poor.

AR: That's the ideal. How do you ensure compliance?
Abdelaziz: I trust that when African governments make commitments, they mean good for their people and that they will implement those commitments.

AR: So your hope is based on trust?
Abdelaziz: Do I have a choice? I have no enforcement mechanisms, neither has the UN or the AU, to compel any president or prime minister to do anything.

AR: Do you have a feeling that there is more seriousness now than before?
Abdelaziz: Yes. What makes me think that way is the spirit of regional integration that is happening now. Each subregion now has an integration plan, beginning with a free trade area in 2017, a monetary union by 2034 and eventually an overall African free trade union. You will ask me if this is realistic. I will tell you: let's try to achieve it. If we don't, we will give it two or five more years, but let's try. Then there is the linkage between peace and security and development. You can't implement a transformative agenda when there is no peace and security.

AR: Your office is creating a monitoring mechanism to track commitments made towards Africa's development. Why such a mechanism?
Abdelaziz: In 2008 the General Assembly adopted a resolution on Africa's development with specific commitments to be implemented by the African countries themselves and others by their development partners. Unfortunately there was the financial crisis of 2008 that made it difficult to implement many parts of the declaration. In 2010 the assembly requested, and the secretary-general proposed, a mechanism to check progress on the implementation of the commitments in that declaration and those made at other main UN conferences on Africa. The resolution was very clear: it said that the new monitoring mechanism would build on existing ones. We counted 52 mechanisms! So we are not reinventing the wheel; we will rely on the information from other mechanisms.

AR: Are you going to analyze commitments made over the past decade or so?
Abdelaziz: No. In each report we will concentrate on four or five relevant issues that will be considered by the UN in the next two years, beginning September 2014. This year's report will concentrate on accelerating the implementation of the MDGs, climate change, good governance, as well as agriculture and food security.

AR: Which means you are tracking commitments and their impact on the ground in Africa.
Abdelaziz: Absolutely; and proposing alternatives that could be taken.

AR: When you say “commitments,” what do you really mean?
Abdelaziz: These are commitments on aid, trade, FDI [foreign direct investment], the movement of labour between countries, human rights, good governance, combating corruption, etc.

AR: Is there a way to ensure that these commitments are followed through?
Abdelaziz: No. But our work on the monitoring mechanism is done in consultation with the AU and African countries on one hand, and with donors and development partners on the other. We also work with the OECD [Organisation for Economic Co-operation and Development] countries, the World Bank and other international institutions.

AR: Your report will encourage implementation of commitments?
Abdelaziz: We are following a non-confrontational approach. Our task is not to name and shame, that is, to single out countries that are implementing commitments and those that are not. We will give the analyses without getting into the polemics of who did what, who did not and why.

AR: So how does your report assist in having these countries fulfill their commitments?
Abdelaziz: It will provide an honest assessment of everybody, including African countries, in a way they will find themselves morally obliged to implement or consider the report's recommendations. By speaking out on climate change, on the commitments that have been made in Copenhagen, in Mexico, by pointing out the percentage of the promised funds Africa receives and the levels of implementation by African countries, we will be able to provide the full picture to policy makers.

AR: So this is fully an advocacy task?
Abdelaziz: We are here to advocate for Africa. Aren't we? Why am I being here, the only special adviser for a specific region! We are consulting with everybody as we draw up our report, particularly experts in those four or five areas we are reporting on.

AR: You will be dealing with African governments and nongovernmental organizations?
Abdelaziz: Yes, it's part of the deal. NGOs are allowed to participate as equal partners.

AR: How would you respond to those who say that focusing on commitments, including aid, reinforces the notion that Africa is dependent on foreign assistance?
Abdelaziz: No. Africa is searching for equal partners, not partners coming to exploit Africa. That's why I like very much the review of partnerships that was ordered by Chairperson Nkosazana Dlamini-Zuma of the African Union Commission. Let's have a review of our partnerships with India, with China, with the US, with the EU, with the Arab League. Let's see what's in it for us and what's in it for them.

AR: What is your idea of success with this monitoring mechanism?
Abdelaziz: My idea of success is convincing member states to take additional measures to ensure they implement their commitments or bridge the gaps that we will identify in our reports.