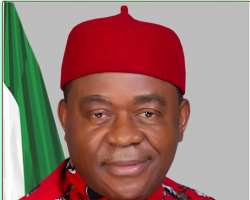 According to Bronson Alcott (1799-1888), an America philosopher, “to be ignorant of one's ignorance is the malady of the ignorant”. In fact, this is the best way to describe critics of Gov T.A. Orji of Abia state who, rather than appreciate the socio-economic and political revolution ongoing in Abia state, decided to hurl brickbats to deceive the ignorant on the Abia Project and thereby make themselves happy.

If we can recollect the words of Ambrose Bierce (1842-1914), an America writer; “fool is he that pervades the domain of intellectual speculation and diffuses himself through the channels of moral activity”. For one to see a good and enduring work and decides to disparage it, ie standing the truth on the head because of pecuniary considerations, is indeed to make jest of the truth.

It beats one's imagination that critics of Chief T.A. Orji's administration (Ochendo Global) could be so pedestrian and hollow in their analysis of the events which ultimately lead them to present hollow criticisms on the Abia Project and makes one to conclude that those critics have nothing to offer except to join in stamping and in fact engraving his (Ochendo's) name in the marble of gold as it has been widely acclaimed.

If his critics have run out of ideas on what to write concerning the administration's positive running of the state affairs, they should shut up. Numerous developmental projects stand tall for prosperity to behold. Are we talking about the massive construction and reconstruction of infrastructures in the towns and communities of the state, the administrations building of multi-million naira and internationally acclaimed modern health institutions, including a network of roads or the well organized security network now in place?

Before the inception of the Ochendo's government, electricity was very epileptic, insecurity was at its crescendo, unemployment was spirally on the increase while the economy snow-dived to the point of leading the state to bankruptcy. Gov. Orji's detractors saw that as an opportunity to blackmail the government despite the glaring evidence that the problem started from his predecessors. Now, having fixed the economy, empowered the women and youths and made electricity to glow continually in Umuahia and environs through the installation of 132kv sub-station of the then Power Holding Company of Nigeria (PHCN), hecklers of the Abia state administration are now talking about Village Bridge that collapsed recently as Odimegwu Onwumere recently wrote.

If we accept the facts that only one bridge, the Igwu Bridge suddenly gave way, making it impossible for the Ndi Ebe Abam people to connect with other villages, does it not point to fact that the administration is alive to its responsibilities, having built so many bridges and roads: an aftermath of which made one single bridge that recently collapsed on July 1, 2014 a headline news?

Consequently, their resort to criticizing the government on its alleged inability to fix infinitesimal project, like a village bridge, is a clear testimony that they have accepted the fact that the administration has taken care of bigger and much pressing projects. Certainly, they have come short of acknowledging the fact that Gov. Orji is carrying a revolution no other governor of the state has ever carried out since the creation of Abia state in 1991. People call it a revolution because, for the first time in the history of the state, a new government house is being built, twin secretariat for public servants have been completed and currently being used while housing estates are springing up in Umuahia, Aba and some communities in the state.

But has the Igwu Bridge collapsed and vehicles still ply on it? If the critics said the bridge was in bad shape, it would have been understandable. Actually, the bridge got dilapidated some months back and had to be fixed by the State Ministry of Works pending the expiration of the raining season when comprehensive rehabilitation would be done on it. But unlike some projects which receive some bashing following constant rains, the bridge may have been affected by the pounding of the rains.

But that does not make it totally unused as minimal movements on that Umuahia-Bende-Ohafia road is still on. Motorists still ply on the roads and make their ways to and from Ohafia. Aside the road, there are other roads which the people could access to get to other communities and towns including their neighbouring communities. It is a truism that many roads in the state including the ones in Arochukwu/Ohafia federal constituency have been put in good shape.

Accordingly, the once dilapidated, ridiculed and maligned Abia state has been upped to the point that its economy flourishes, its women and youths empowered and provided for, while the residents have their environment and properties secured at a time insecurity is on the increase in the country. Indeed, a night in Abia is beauteous, calm and free. Residents and Visitors relish this system of goodly feast. It is the philosophy of Ochendoism at work.

Gov Orji started working for Abia when he was sworn in May 29, 2007 as the third executive governor of Abia state and did increase the tempo of performance in his second term of office. One of his remarkable achievements is the assemblies of hitherto political enemies into one large and accommodating umbrella. For people who disagreed politically since 1999 when the fourth republic came into being to have agreed to work together under a common front to move the state forward shows that politics is actually a doctrine of possible and a concept that is attainable.

In Abia today the three arms of government work in concordance. Rule of law reigns supreme. Judicial officials are provided with the logistics as well as some cozy offices to perform their onerous task of dispensing justices without fear or favour. The administration not only ensures that the people have unrestrained access to justices, it equally emphasis the fact that the good of the people is the highest law. These are the concepts that calm a society and enthrone peace and unity in the polity. And this is what blackmailers of his administration have refused to acknowledge.

It is pertinent to point out at this juncture that awards are not given because of mediocrity performance; it is given to great men who have worked hard for to better humanity. Like Henri Frederic Amiel (1821-1881) the Swiss writer once posited, “great men are real men: in them nature has succeeded”. However, I sometimes don't blame the traducers of Ochendo. Like Ralph Waldo Emerson (1803-1882), America writer declared, “To be great is to be misunderstood”. Indeed, the cynics of the Abia administration are dazed because of the blaze of splendid accomplishments of the government.