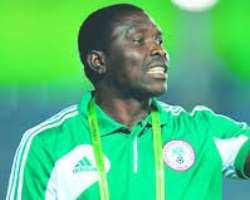 The Head coach of Nigeria U-20 Women's national team, Peter Dedevbo, has expressed his delight with the Falconets' 4-1 win over New Zealand in Sunday's quarter final game of the ongoing Women's U-20 World Cup in Canada.

Dedevbo led the U-17 women national team to two quarter final appearances at the FIFA Women's U-17 World Cup in Trinidad and Tobago 2010 and Azerbaijian 2012 respectively.

But on Sunday, a brace each from Rivers Angels' pair of Asisat Oshoala and Sunday Uchechi at the Moncton Stadium fired the Nigerians past the Oceania side into their third consecutive semi-finals at the FIFA U-20 Women's World Cup, Goal reports.

On the secret behind his team's victory over New Zealand, Dedevbo told Goal that the successful execution of the extra practice on creating and converting chances aided the Falconets' victory.

“It means a lot to me – after taking the U-17 to the quarter-final twice – people saw it as if I was jinxed not to pass the quarter-final stages at a World Cup competition. I'm happy to have finally broken the jinx,” Dedevbo told Goal.

“In our previous matches we created chances but failed to convert them. So the emphasis was on how many goals we can score during our training session before the game.

“When we won our last group match to qualify to the quarter-final, the confidence in the team began to improve. And winning today the confidence is high, the character is high and everything about the team is high at the moment,” he said excitedly.